Last weekend I was still wondering what Autumn was doing. It seemed to be taking its time about arriving. After a week of feeling under the weather and labouring away in a windowless back room at the shop (where the window is concealed by blinds and the doors by chipboard) I hadn’t noticed much change. 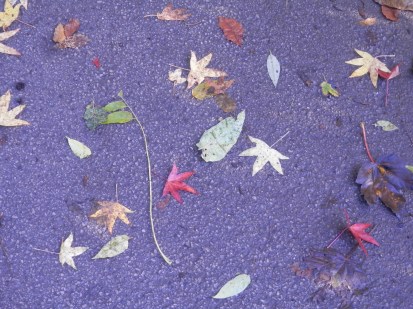 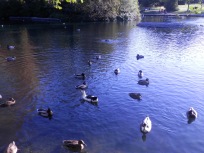 You may ask why we have blinds on the windows – and I will tell you. It’s one of the owner’s special security features. He thinks if people can’t see in they won’t want to rob us. It’s also great if you like working in twilight, don’t mind being ambushed by people lurking outside the shop and don’t want customers to find you.

I once worked in a jewellers where the owner had a similar idea. He replaced the back door left by the previous tenant because it had a small window in it. This was a weak point in his eyes, though it deprived us of the ability to spot anyone lurking outside as we left the shop by the back door.

Imagine his surprise when the landlord asked him why he’d taken off a Post Office approved security door with bullet-proof glass window and replaced it with a lightweight household door with a bit of steel sheet screwed to it.

We are hoping to have the front doors re-glazed next week, which will make things lighter, remove the impression that we are under siege and stop people asking if we’ve been robbed.

I appreciate that they are either concerned or curious, but it’s becoming tedious have the same conversation day after day. We’ve even had several, including one who had never been in the shop before, wanting to discuss out new security measures.

Let’s just say that no robber will be able to get in and out of the shop in two minutes again.

Meanwhile, as Julia did the laundry, I went for a walk in Arnott Hill Park, had a look at the new sculpture and noticed that autumn had arrived. I’ll put the photos up now, and then I’ll go shopping.

We went for a ride out yesterday afternoon and I thought we’d have a look at  Budby Flash. All was not well.

The smell should have alerted me, a very ripe and festering cabbagey sort of smell. However, it didn’t, and as I scanned the pond, looking at a few apathetic mallard, it was Julia’s observation from the other side of the bridge that alerted me to the full horror of the situation –  “I don’t think the Kingfisher will be diving into this lot!”

I had a look at the other side of the Flash, and was amazed at what I saw – acres of blanket weed. Thick weed, too, not just a light covering but swathes of weed several inches thick.

In the distance a Moorhen was actually walking on the weed instead of swimming.

It’s a hazard to fish,  though the few we saw seemed healthy enough, and I’m not sure what, if anything anyone will do about it. So there you are – a useless report, which proves that facts, though factual, are not necessarily interesting.

I could use that as a subtitle. 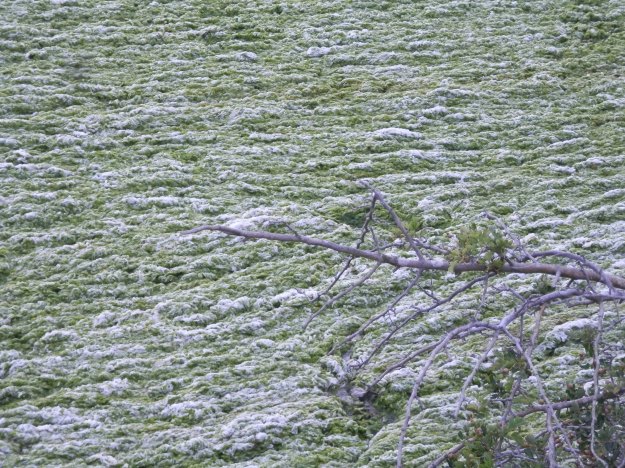 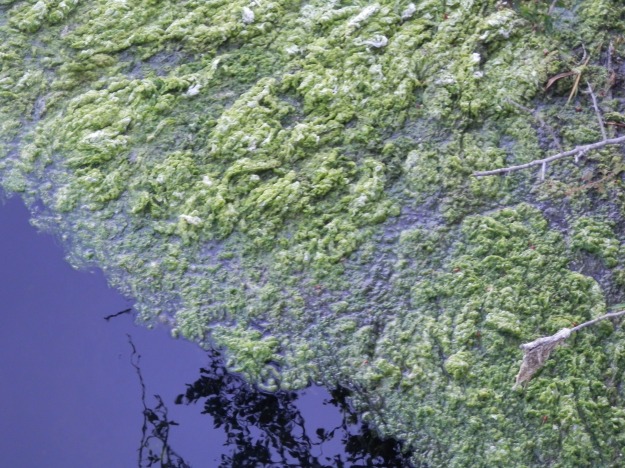 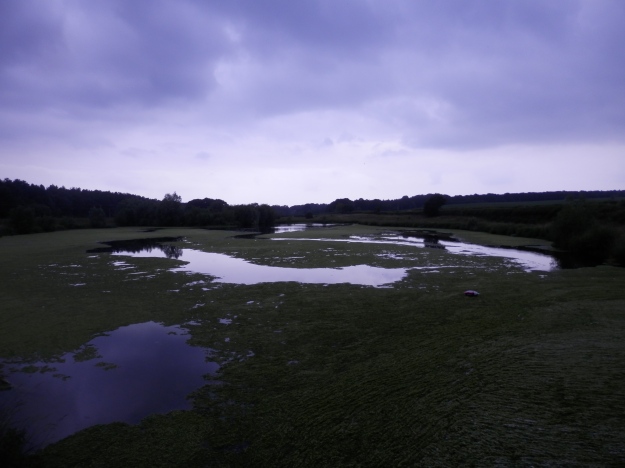 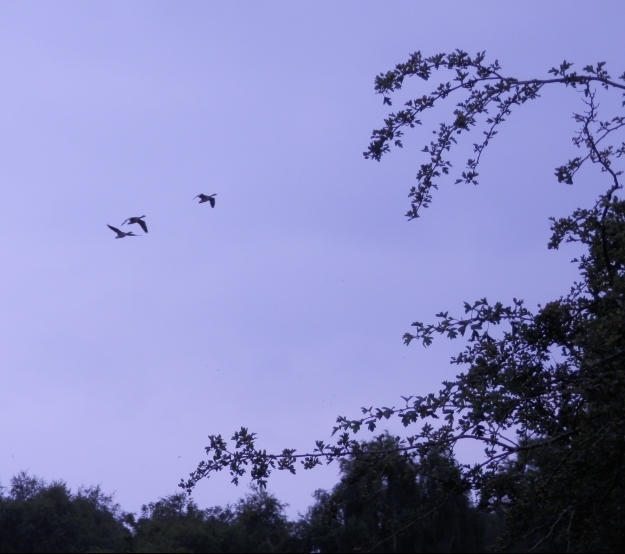 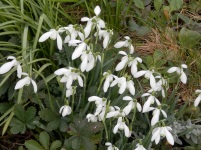 There are actually four cottages in the block you see – one at each end and L-shaped back to backs in the middle. Victorians knew how to cram them in. Water came via the pump you can see in the middle of the photo. The toilets are behind me and the wash house is in the end of the left hand building. No indoor facilities then, unless you count guzundas.

These are the toilets – there were approximately 100 people on site so the provision is hardly generous. They also appear to be unisex. Not sure if women worked there, but if they did it’s hardly the Victorian approach I’d have expected.

The effluent falls down the privy and emerges through the arches in the side of the pit. With 100 people using it, you’d think they’d need something a bit deeper. 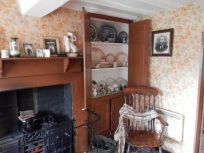 The cottages are very well fitted out, though I’m not sure they have the smell right. I’m sure that with candles, crowds, open cesspits and and a lack of washing facilities the smell must have been well to the forefront of your life in those days. They have smell sprays at Jorvik to give you more of an idea. I didn’t think they were terribly convincing twenty years ago, but they may have improved.

Sorry about the low tone of this post, but like any man, there’s a small boy lurking just under the surface, and small boys are fascinated by toilets.

When I picked up my old camera last week there were nearly 1,400 photos on it. Each one is a memory, even if the memory is “…and that’s one I took in case the first photo wasn’t any good…”.

The first photos I’ve taken off are from Sherwood Forest – I presume three of the sculptures are still there despite the remodelling of the visitor centre, though I suppose the Robin and Little John statue will have gone as part of the demolition of the old one

The last photo of this set is an outlaw in the car park – I’m afraid that there probably won’t be any outlaws in the new car park. Well, there are no trees, for one thing. This is progress.

Robin Hood lurking in the Forest

I’m quite enjoying a stroll through the old photographs, though some are a bit painful when you think about the passing of time.

It was difficult knowing what to do with my afternoon off. By the time I’d been round Aldi to track down their prize-winning mince pies (which weren’t that good in the end) and eaten lunch, there wasn’t much time left.

Clumber is a bit too far, so I thought I’d have a look at the oaks of Sherwood Forest. Well, was I in for a surprise. The car park is closed, the new visitor centre is in place and they now have a new car park. It’s about 400 yards away from the visitor centre and across a main road. When you get to the visitor centre it’s a long way from the proper forest. I say this from distant observation as I couldn’t be bothered with the walk.

Several people feel the same way if Trip Advisor is to be believed.

In shock, I tried Budby Flash. It’s nothing much, on paper, just some flooded subsidence with a few birds, but it can be quite magical at times.

The sun tried to be entertaining, a flock of tits came to frustrate my camera skills and despite a lack of funding to build a visitor centre I left feeling cold but happy. 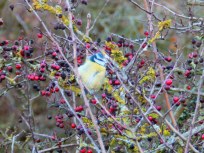 The year is clearly declining.

However, by the time he got to the car at 7.10 the sunrise was starting and after we’d driven a couple of miles it was forming a great backdrop to pictures of trees and electricity pylons as they rose from the early morning mist.

On the other side of the road a power station rose, massive and mysterious, from more mist. The mist of the Trent Valley is one of the under-rated sights of Britain.

I had my camera with me, but there was nowhere to stop.

This is a shame as I can’t share the glorious morning with you.

But it’s also a good thing, as these photographs rarely look as good as the real thing. I have, several times, cheapened my memories with photographs that don’t reflect the true beauty of the scene.

It’s very tempting to add a haiku to this and claim it as poetry. In the next post I will explain why I didn’t.

We had an excellent cream tea at Clumber Park on Monday – our second visit of the year. I’ll let the pictures speak for themselves. 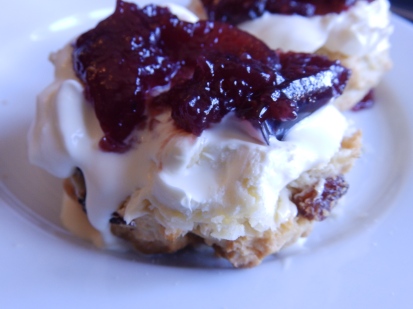 There are many things I could say about the National Trust, and they wouldn’t all be compliments, but they do know how to put on a good cream tea. At Clumber they may have staffing issues, as we’ve found on both visits, but the teas, when you eventually get them, are excellent.

To be fair, if you take scones, jam and cream it should be hard to get it wrong. On both visits the food has been excellent but the service has stuttered a bit.

There is actually a Cream Tea event coming up –