Another trip to Peterborough and not a kite to be seen. There was only one kestrel and that was hunched on a lamp post by the side of the A52 pretending to be a buzzard.

I did manage to get three good views of buzzards.They were all pale forms and they were all puffed up against the cold. It must be a miserable existence being a bird in winter. One of the sightings was unusual because the bird was perching in a tree by the side of a flyover. As I drove past I actually had the strange experience of looking down on a perching buzzard – even if I was only looking down on it by a matter of inches.

It was a good day for magpies, hopping around on ground that was conveniently coloured black and white by melting snow.

Back at home I went through the back of a bird watching magazine, the section where they list all the rarities. Last month we went past a pond and saw a white heron-sized bird. Great white egret, I decided, though it’s nice to confirm there has been one about. I couldn’t see any news of one on the internet but the magazine report shows there were some sightings in Derbyshire, which will do for me. It also shows there were ring-necked parakeets seen in West Bridgford and Aspley, though we haven’t seen any recently.

Glad to say we’ll be starting back in a few days as I want to start getting things ready for the bird watch and the porridge day, and get my Christmas present into action. Yes, it will be all action once we get back…

We went to visit family at the weekend as part of the build-up to Christmas but managed to work in a bird watching exercise to tune us up for the Big Farmland Bird Count . We’ve spotted quite a few kites over the years as we visit family in Peterborough, and we generally see one or two around the Stamford stretch of the A1.

We saw seven kestrels, a buzzard and three kites. We could have done with a few more buzzards but as I said to Julia, this just shows how things change. When I was a kid it was a rare treat to see a buzzard and involved travelling a long way to see buzzards and all the way to Wales to even have a chance of seeing a kite. Of course, when you click the link and see there are now 700 kites to see in the area, it’s a bit deflating to think you only saw three.

After that we spent several days being ill with the latest bug going round. This is consequently our worse planned Christmas ever. I went out to buy the main stuff on a shopping trip a couple of days ago but didn’t quite get it finished because I started running out of steam (and because I ran out of space in the small-sized shopping trolley I had selected).

Next day I took a quick run down to Lidl to buy the bits I’d missed.

Now, I don’t want to subject you to a blog on my shopping habits because they aren’t very interesting, even to me, but there is one point of interest. For just under £25 I bought a serviceable-looking telescope, so it looks like bird watching in 2015 just took on a new dimension.

I’m resigned to the fact it won’t have top-quality optics but I suspect it will be better than our current telescope, purchased in the 1970s to watch a squacco heron at Eyebrook Reservoir. That brings back memories…

Sorry, when I woke up this morning I realised there was a distinct lack of Osprey in the post,. On looking again I also see no mention of the six degrees. I have excuses, of course, including three different versions of A Christmas Carol to watch.

I never did see an osprey when I was young, I had to wait until the kids started bird watching and I was able to engineer a holiday in Scotland.

However, having started looking up ospreys I found a link to a blog called Ken’s Diary. It’s about the Ospreys at Rutland Water. It also contains mention of Orton Longueville School, where he used to teach and where he recently went to talk about Ospreys.

That is the magic of the internet, you start by looking for ospreys and end up meeting your old history teacher.

We had another party yesterday, but by the time I’d got it on the table there was no time for photos so you’ll just have to take my word for it. I did get a couple of photos of the meal but by the time I sat down several of the guests were off getting seconds so it just looked like a couple of sparsely attended tables with dirty plates.

On the positive side, the plates were empty (well, mostly) so it can’t have been too bad. There was also enough left for my tea tonight too – red cabbage with apple and cranberries, parsnips with honey and mustard and squash with garlic. Two out of three had improved with age. I’ve never quite got the hang of adding taste to squash so let’s call that a work in progress.

I have had some success with a brown sugar glaze, but sugar glazed squash and honey glazed parsnips seemed a bit similar.

The sausages were good, probably the best batch we’ve ever had, which brings us round to Friday…

We had eight piglets this morning. There’s a small problem regarding my ability to upload photographs but once I get it fixed you will have a photo. Mother and babies are doing well – they are all feeding well and she is lying there grunting in a relaxed manner.

Saturday. Here, as promised, are the photographs.

It’s 3pm, the clutter is cleared, the games are over and Elvis is singing about a Blue Christmas. That’s the first party over – buffet for eighteen for the group plus carers and four generations of the Rose family. Tomorrow it’s staff and various people who have helped us during the year – sausage and mash for eighteen. This, I suppose, is the start of the countdown to Christmas.

We’ve cooked for forty and fifty before, which stretches the kitchen capacity and calls for an ingenious use of space and tables to fit everyone in. Eighteen, in comparison, is just a walk in the park – just scale up a normal meal and chuck a few tables up in a line. We used paper plates. I’m not sure whether that’s good or bad in ecological terms – it’s a waste of paper but it saves on hot water for washing up. However, it’s a lot easier to chuck paper plates away than it is to get stuck with the washing up. 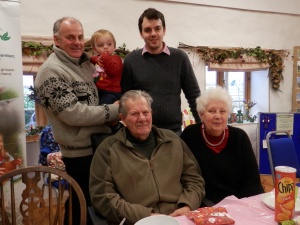 Father Christmas came to call and was a lot more cheerful than the grumpy Santa they had on Saturday. He also seems to have put his arm round a lot more ladies than the Saturday Santa. Maybe he’s on to something…

I’m struggling to think up new titles for my posts. Half of me wants to become a bit tabloid (“Great tits on the table today!” is so tempting when discussing the presence of Parus Major at the bird table.) The other half of me wants to take the easy way out with a dull title such as “Tuesday”.

The problem is that I don’t think the tabloid approach helps build a quality image, and the other approach just leads to a confusing number of posts named after days of the week.

We had a group from a MENCAP gardening group. They were out our way to collect horse manure and had arranged to drop in. We had a chat and home made mince pies, sold them a hamper and a couple of penguin tree decorations and invited them back next year for National Breakfast week.

The Bread Group raised £26 for Mary’s Meals last week when they did their Christmas meal, which was kind of them (as was the food they left in the fridge for me). Hopefully we will be adding to this next month, particularly as we will have the Saturday morning cafe participating for the first time.

9) Set up skittle alley in barn

11) Plan menus for meals on Wednesday and Thursday

And that’s just for starters – there’s always plenty more to do. My next job, however, is making sandwiches for lunch…

It was a crisp December day today, which was good because a wet, grey day would have taken a lot of the fun out of it. We had a change of gear today with the Christmas Event and though Santa and Elf worked in harmony we still managed to scare two children. I tried to  make one happier about the situation by taking my wig and beard off to show him there was just a normal man underneath it all but this just made things worse.

Either I have a face that scares children or, as Tim put it: “To him it just looks like you peeled your face off.”

Sometimes you just can’t win. On the other hand when you examine the picture there is definitely a touch of Dan Aykroyd and Trading Places in my eyes,

What was particularly good about the day was that we saw quite a few new people and were able to talk about the farm. That’s always good because, as we found at the conference last year, when you talk to other people you realise what progress you have made. To be honest, although I’m there most days it’s a case of not seeing the wood for the trees. This is ironic when you see what I do when I look out of the window (i’ll post a picture tomorrow).

Hopefully some of those people will be reading this, so it might be a good time to apologise for talking too much, or for discussing care farming whilst dressed as Santa. 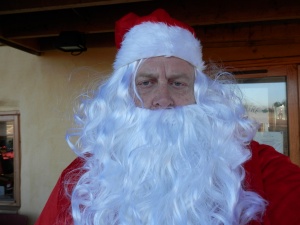 We made the penguins from beads – only sold one but thought they were worth a picture anyway,