…more is said than is ever done.

Yes, I’ve found a new formula for titles, though I have to admit that it’s tinged with the same old cynicism. I’m sure that anyone who has ever had to work with groups and volunteers will be familiar with the sentiment behind the title.

It is possibly best summed up by a statement I once heard at a meeting. They used to love meetings on the farm and had a great capacity for attracting people who were distinguished by a talent for empty talk. One of those people actually told us that their talent was for having ideas. I hadn’t, until that time, thought of that as a talent. Volunteers with ideas are ten a penny. Volunteers who actually carry their ideas through have a price beyond rubies.

To be fair, I’ve worked with some great groups of volunteers. Obviously, today was one of the days when I found my thoughts dwelling on the ones who weren’t so great.

It’s been that sort of day, but least said, soonest mended.

I had an unexpected day off today, as I worked yesterday. We are still not back to full time working.

Things started to go badly when Julia couldn’t find her keys to the gardens. It led to half an hour of muttering and moving things. I couldn’t help, as I (a) couldn’t remember where she’d had them and (b) when I advise her to try to remember her movements she goes ballistic. She could, if I’m honest, be better at taking advice.

To cut a long story short, I gave up a portion of my day off to borrow a set of keys and get a new set cut. Then, because I clearly hadn’t had enough fun, I went back to get two of them re-cut. You’d think cutting keys properly with a modern machine would be simple enough, but clearly not.

It was too late to do much by then, so I made the decision to give up on the rest of my day off, made Julia share her sandwiches, waited round, did a few odd jobs and generally wasted the rest of the afternoon until it was time to give her a lift home.

To be honest, I have had better days.

Guess what happened on the way home?

That’s right, Julia remembered where she had put her keys… 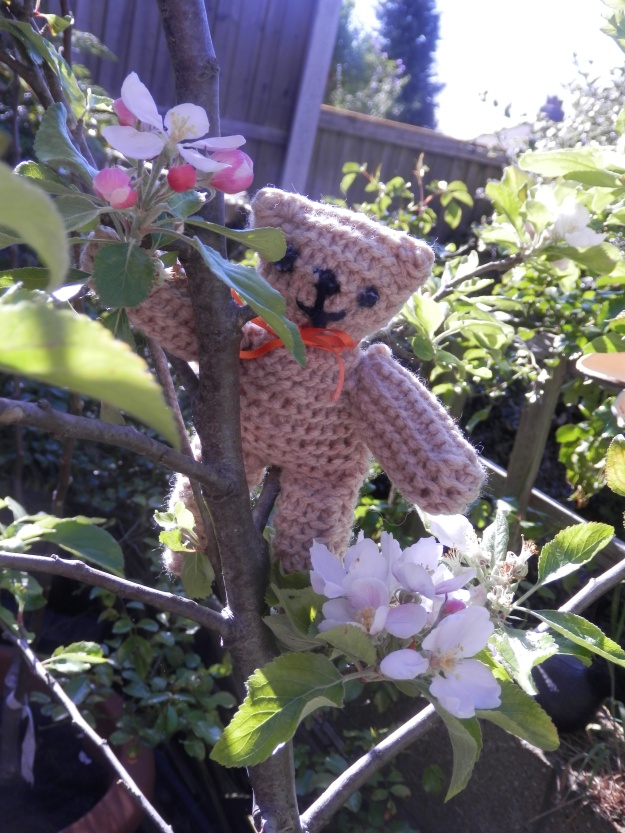 I can’t post a bear picture as a header because I’m incompetent. Julia sent me these two pictures but I can’t get them to load into the media file so I just dropped them into the text. It’s a fascinating study in how a bit of knitting, a few stitches and a bit of imagination ends up as a teddy bear with a distinct personality of its own.

She has posted these pictures on the Mencap Facebook page, so there’s a chance we might be seeing a few more of them about as lockdown progresses.

Sooty is one of the best known bears, and he has been helping charliecountryboy retain his sanity during the lockdown. I use the term ‘sanity’ in a fairly loose sense, as you will have realised if you’ve read his blog before.

One of my favourites is Pooh, the bear of very little brain, and an unfortunate name. We have a copy of The Pooh Cook Book upstairs. Julia bought it. I’ve never actually read it, as I suspect it isn’t really a cookery book, just going through the motions. 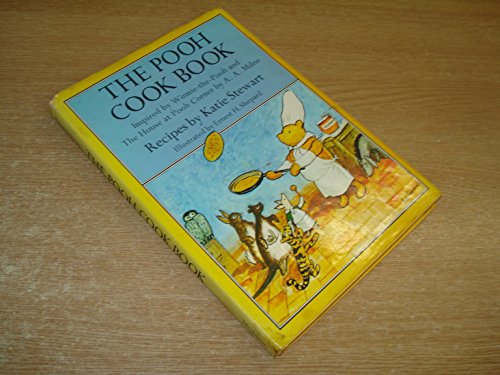 I’m fairly sure that the humour I see in the title was unintentional, unlike the next book, which has a confusingly similar title.

It is, however, quite different, being a book of Thai cooking compiled by a woman nick-named Poo. It apparently means ‘crab’ in Thai. She’s really called Saiyuud Diwong, but that wouldn’t sell as many books. Let’s face it, Cooking with Saiyud Diwong wouldn’t actually rate a mention here.

“For I am a bear of very little brain, and long words bother me.” A. A. Milne

I’m going to post about the garden to start with. It’s a nice calm place to start.

We bought sausage baguettes from the Co-op on Wilford Lane and ate them as we watched the geese fly over on their daily trip to the river. It’s an extravagance but it’s nice to eat out once in a while, and it’s hardly Babylonian in its excess.

There was a robin, a crow, a few pigeons, some magpies and a flight of about a dozen long-tailed tits. You’s think I’d manage some decent photos but I had the small camera and it was set for close-ups. By the time I’d adjusted it I normally found I was zooming in on an empty branch.

The flowers were less flighty and I even got a couple of wildlife shots, though bees and caterpillars aren’t the hardest of subjects. 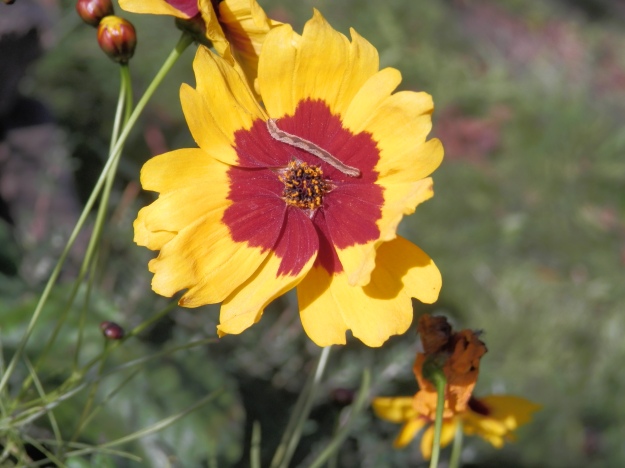 Caterpillar and flower. My flimsy knowledge of plants and wildlife is revealed for all to see.

Safer ground here – it’s a bee and a nasturtium

Imagine my mind like an over-full bookcase. As you force a volume of coin knowledge in at one end a book of insect knowledge falls off the other end.

Eventually the Council House clock struck nine and I had to leave for work. I may cover the events of the day later – breaking a grandmother’s heart, talking to a lunatic and cynically laying a trap for a potential young collector.

Those, of course, are just the highlights. 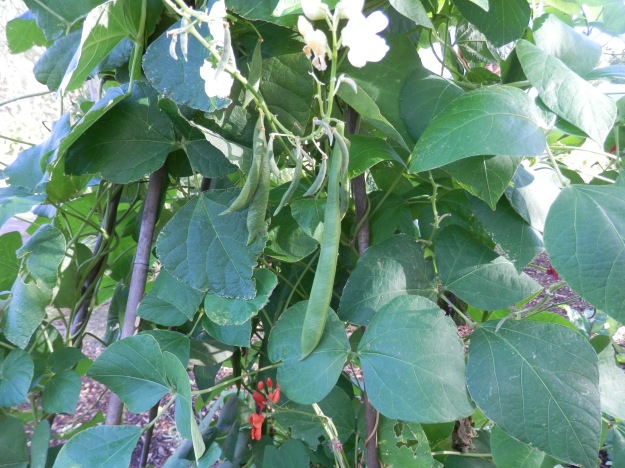 In Victorian times they were grown for their decorative flowers rather than the beans. You have to wonder who first decided to taste them.

Julia had an old bike abandoned by the gardens. It lacked a few bits, but she’s a resourceful woman. With the addition of pallets, stakes, flower baskets and the remains of a bird feeder pole she has managed to produce a talking point. You might even call it a garden feature.

This upcycling is certainly the only cycling we’ve done in the last thirty years.

She’s been working me hard tonight, preparing for the Mencap Open Day so this is it for today. As usual, I have plenty of good intentions but have come up short on execution.

Tomorrow I will try harder.

Today I took some brighter pictures of the garden, including one of a Great Tit eating what appeared to be a caterpillar. You’ll have to take my word for that as it spent most of its time refusing to face me.

When the Great Tits eat caterpillars. I feel that Spring is not far behind. Julia later saw a group of Long Tailed Tits on the feeders, though they flew away as she turned the camera on. They do that. Several Magpies took it in turns to contort their way into the fat ball feeder, but they also declined to pose for photographs.

Birds can be very annoying at times.

It was brighter today than it had been yesterday.

No light, no water, but we do have a heater in the cabin

The work routine is beginning to develop nicely – taking Julia to work and the driving back round the ring road to idle away my days. I went through the medal stock today, including medal-mounting accessories, foreign medals and ribbons. That took me all morning, as there was a lot of chaos to tame, and a lot of bits and pieces.

Fortunately, nothing is beyond the capabilities of a man with time on his hands and a selection of plastic bags.

It’s been one of those frustrating days again.

Wrote some emails to the hospital. It was difficult to get the tone right – no point being sharp or rude, but I don’t want them to think they can get away with second class service. The trouble is that you edit so much you start chasing your tail.

I’m having an Alice in Wonderland sort of feeling, as the hospital version of my story is subtly, and maddeningly, different from my recollection. (Yes, I could have mentioned Dali or Kafka there, but I would not have had a photograph to use).

Sent the emails and find that neither of the recipients is in the office till the end of the  week. By then I may well be on my third cancelled operation.

Dropped Julia off at an Open Day they were having at Mencap. This involved driving across town and exploring several sets of roadworks. They proved unexciting and rather frustrating.

Then I cut through Sneinton on my way to the pharmacy. The things I’ve ordered hadn’t arrived. Sneinton is an interesting place with lots of history, but, as usual, I ignored that and just moaned about the traffic.

Called at the jeweller, moaned about life.

If it carries on like this they will be inviting me to the NHS Christmas Party.