It’s the first day of meteorological autumn, which is a sad day for those of us with aching joints.

It’s also the 80th anniversary of the day when Germany invaded Poland in 1939, and set the Second World War in motion.

This ruined my father’s first holiday. Under the Holidays with Pay Act (1938) many workers were given a full week’s paid holiday every year, the result of a twenty year campaign by the Trade Unions. It was the “with pay” provision that made the difference, up until then workers had often had holidays such as traditional Wake’s Weeks, but without pay. It was difficult enough paying for food and rent for most working people, without the additional burden of going away so holidays were not necessarily seen as a good thing.

It was this legislation which helped make Butlin’s camps so successful. Not only did he have camps (Skegness and Clacton by 1939) but the working classes had holidays to take in these camps. In 1939 the military moved in – Skegness became HMS Royal Arthur (bombed 52 times during the war and, it is alleged, claimed as sunk by Nazi propaganda) and Clacton became a training base for the Royal Pioneer Corps. The camp at Filey was under construction and, when finished, handed over to the RAF. Butlin also built camps at Ayr (HMS Scotia) and Pwllheli (HMS Glendower) for the Navy, which he was able to buy back at the end of the war.

However, back to my father, who, as a ten-year-old, was enjoying himself on his first ever holiday. It was in Morecambe. I always remember this story when we are in Morecambe. They had only been there a couple of days when they were told they had to go home as the RAF were moving in.

I see that although we have been to Morecambe several times, including this year, it has nor really featured in the blog. Last time we visited Morecambe I ended up changing a tyre and Morecambe seemed to get left out.

Anyway, enough of my rambling for another day.

I’ve just remembered that I have a backlog of posts to write.

Earlier today I did an internet quiz and my favourite deadly sin is sloth. I wonder how they knew…

Julia was on holiday today, a fact which she celebrated by waking up at 5am just like it was a working day. After a brief lie in she carried on the holiday frivolities with an outbreak of cleaning before making breakfast.

The woman just doesn’t know how to relax.

She could profit, in this respect, from watching how I do it.

When breakfast appeared I decided to join her.

It wasn’t quite as simple as that. It never is. First I tied my feet together whilst stepping into my pants, then I noticed I’d put my vest on back to front. Two items of clothing, two problems. Even toddlers do better than that. The process of putting my trousers on, which has often been attended by a certain amount of peril went without trouble this morning so at least something went right.

After that I did the laundry and the shopping. Reference to other blog posts that list my Sunday activities will reveal that Julia isn’t the only one who hasn’t quite got the hang of holidays.

I also managed to write up most of our visit to Cleethorpes as I need to catch up on my writing about pier visits.  That just leaves Skegness. I say that, but as you may have guessed, the holiday is likely to encompass a few pier visits and I’m likely to end the week with more of a backlog than I started with.

The trouble with my ambition to elevate procrastination to an art form is that there will always be a list of jobs to do.

I may write a haiku about procrastination, as it seems a suitably zen subject.

With any luck I’ll get round to it tomorrow…

You can tell it’s holiday time because the roads are clear, the travelling is easier and there are groups of teachers wandering about dressed as ramblers.

So what did we do on our holiday?

Well, we started by looking at the new bantams and chicks to ensure they were OK.

Sadly there was a dead lamb in the barn. It had been found last night by a group of ramblers, having stuck its head through the sheep netting and then threaded it back through an adjacent square. You couldn’t do it if you tried. In the subsequent panic it strangled itself.

No you couldn’t make it up if you tried. The Farmer had been forced to cut the fence to remove it. That was how tight it had managed to wedge itself in.

My first job was to check the incubator and then to look up what a flashing “P” meant. Twenty minutes later I established it was a warning that it had lost power at some point. To be more precise, it had lost power when I unplugged it and moved it. So that was 20 minutes well spent.

It stands for “Power”

Once everyone had arrived we had a good handling session with the new bantams and altered the housing arrangements for the chicks. 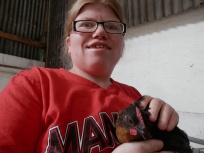 We collected eggs, fed the chickens, did a census of the (heat stress has seen a few of the old ladies off recently) and harvested cabbages. We planted Brussels Sprouts (or nobby greens as they are known in Nottingham), made lavender decorations, twisted corn dollies, showed two groups of visitors around (I keep hoping one of them will be an eccentric and generous millionaire). Julia brought what I thought was a small and tender beetroot in from the garden (I say tender but I have no intention of ever eating beetroot). It turned out to be a radish the size of a golf ball and I suspect it will be both woody and fiery to eat.

We also added more photos to the individual pages and did quite a bit of butterfly counting. (You may already have noticed that.)

And we brought the sun-dried peppers out of the polytunnel. 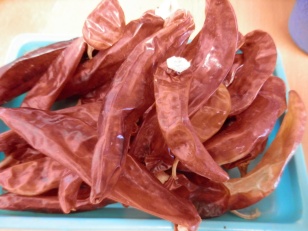 I think that’s all.

Now all we need to do is get the shopping list ready for tomorrow, get set up for yoga, prepare the kitchen.

Number Two son had a broken tooth extracted this afternoon. I wouldn’t normally bring domestic trivia to the blog, but I had to after asking him what time his appointment was.

Yes, it was two-thirty (tooth hurty – the classic joke time!). I tried not to laugh when he told  me.

It’s going to be a bundle of laughs tonight, me trying to suppress my mirth, Julia being motherly and him drinking his evening meal through a straw.

It didn’t quite go to plan – we didn’t set off until 11am for one thing, though the plan had been to be on the road by nine.

The light wasn’t very good for photography so we didn’t get many photographs, and managed to miss three corkers. One was a yellowhammer on a stone gate post (it flew as we raised the camera), the second was an orange tip butterfly we spotted whilst driving down a narrow road (yes, it flew and settled a couple of times but I missed it, despite trying to track it for 10 minutes) and the third was a cormorant drying its wings on the edge of Scarborough Harbour. It would have been an easy shot, apart from the fact I’d left the camera in the car.

I did manage to get a few shots though, just to brighten up the slab of text.

On the other hand several things did go right. We stocked up on cake at Mrs Botham’s and had a couple of pork pies to fill the hole where lunch should have been. They were probably the second best pork pies I’ve ever had. The crust was well-flavoured and crispy and the meat had good taste and texture. With a little bit of jelly these could have reigned supreme. Beaten into second place by the thickness of an eighth of an inch of jelly!

Whitby was a bit of a bust, being pretty much one traffic jam from end to end. Fortunately we had called at Mrs B’s bakery, on the Scarborough side of town. If we’d tried for the tea room we would have been doomed.

After a detour  through some narrow country roads (missing the aforementioned pictures of yellowhammer and orange tip) we made it to Scarborough and the second part of the shopping trip. First, the Poundshop, which isn’t quite a pound shop any more. However, five pairs of reading glasses for £10 should do me for a while. Then the  cheap bookshop, which is better stocked than ever. I bought Julia a stick of Marmite flavoured rock there, because she likes Marmite. I’m one of the few people who seems to be able to take it or leave it. The rock was sweet with the occasional hint of Marmite, but the important thing is that all my teeth survived. 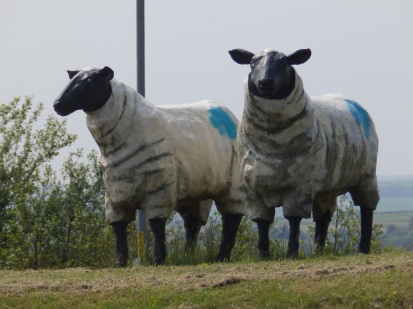 Finally we bought crabs on the seafront and started the hunt for fish and chips.

We resisted the lure of the Golden Grid because although it talks a good game we’ve always felt disappointed (and poor) at the end of the meal.

Winking Willy’s was very good last time we went (despite the name) but it was closed. The Fishpan seemed quite popular, so we chose that. The service was a bit chaotic but the staff were really pleasant and the food was excellent. When I ordered a large haddock they suggested we move onto a table for 4, as it was unlikely to fit onto the table for 2 where we were currently seated. They weren’t wrong. It’s the first time I’ve had a portion so large that it had to be measure in square yards rather than by weight.

Kittiwakes nesting on the cliff below Scarborough Castle

Fish was succulent, batter was crisp, chips were good, peas could have been better, as could the bread and butter, but they were still more than adequate.

In my younger days I once ate the Harry Ramsden’s Challenge and still have the certificate to prove it. I was able to eat a pudding and custard after that, too. Yesterday I had to leave the last four chips because I simply couldn’t fit them in. I did put them on Julia’s plate though, as I didn’t want people thinking I was a wimp.

seemed a bit disorganised, though they were very friendly and