We went out for breakfast this morning, took a ride in the countryside, looked at some ducks, who were enjoying an unusually full pond, and dropped stuff off at the charity shop. It was not a particularly full or active day, but it still left me feeling tired, as I am once again feeling a bit fluish.

It may be corona virus, man flu, ordinary flu, fatigue, cold, or hypochondria. It’s too early to say, but I will keep you up to date with developments.

I’m fairly sure I just need some Lemsip and a good night’s sleep, but we will see what happens overnight.

The day was not quite as bright blue as yesterday but it was still good in places. Similarly, the magpies were not quite to numerous or as perky as they were yesterday. As compensation, we did have three good views of buzzards and two of kestrels. We also watched some frolicking tufted ducks, as mentioned above.

On the plus side, there are more flowers and more blossom.

My sister went out for a walk this morning and recorded gadwall, kingfishers and red kites too. We might have to visit her and see some of her birds next time.

When we returned home we were surprised to have a knock on the door – it was a postman with a parcel from eBay. It was a boxed medallion, and would fit neatly in the palm of my hand. It was in a box big enough to hold half a dozen hardback books. You can’t say they had skimped on the postage.

I will probably take a photo tomorrow but the light is a bit too dim at home.

Finally, because this isn’t going to be a long post, I have just been told that an article I wrote has just been accepted for publication in the April or May issue of Medal News.

All in all, apart from the cold/flu/hypochondria things have been quite good.

Last night I wrote a long, rambling and, frankly, dull post about a number of uninteresting subjects.

It was so boring I fell asleep in my chair and didn’t wake up until after midnight. I looked at what I’d written, made some sandwiches and then went to bed. It wasn’t even worth fixing.

To sum up – I’ve been invited to take part in a joint pain project. It involves filing in five questionnaires over five years. The confidentiality and ethics explanations are longer than the survey, and most of the survey consists of ticking boxes about different sorts of pain, including lanciating pain. It’s like stabbing pain when I look it up.

My two conclusions so far are that someone got a grant to do as project, and that they have an un-necessarily large vocabulary. I don’t recall all the pains I could have but I don’t have (a) enough time or (b) enough body parts to experience so much pain.

To make things worse, I went to the pharmacy to pick up some pain-killing gel the hospital has prescribed for me, though I didn’t ask for it and don’t have much pain. They were out of stock so I couldn’t get it. And today, for the first timer in ages, my finger started hurting.

That was my ten minutes. I’m off to drink tea and watch TV for a bit.

I spent a lot of the day loading a set of Flying Scotsman medallions. They are interesting things – five in silver and one in 9 carat gold. Technically they are three sets, but we’ve put them all together to get them all away at the same time.

The pads in the box are actually black but the camera sometimes does strange things. And the boxes are square.

The story of the Flying Scotsman is full of interest, with World Records, grand obsessions and a host of sub-plots. If you follow the link in the first line you will get a good idea of the adventures it has had.

A piece of Flying Scotsman in the middle of a silver medallion – if you read what was replaced in the pre-2016 refit you will appreciate how many spare bits they had.

The gold medal is a very pleasant medal, though it does lack a piece of the original train. A few months ago we had some silver coins with pieces of copper from HMS Victory. It’s not a new idea, somewhere in the house I have a medal cast from the lead of Selby Abbey roof. After the 1906 fire they made the medallions and sold them in aid of the rebuilding. (Readers from the USA may be interested to note the picture of the Washington family coat of arms if they follow this link).

You can also learn a lot about marketing if you study the way these things are sold. 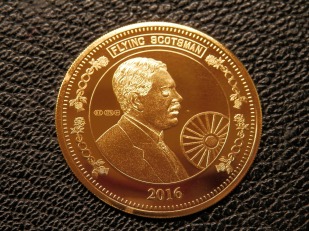 It was an interesting afternoon. I was tempted to write more about it on eBay, but I’m paid to sell, not to write. It’s here if you want to read more.

This is a medal commemorating the famous Nottinghamshire poet Lord Byron. Apart from poetry he is best known for letchery, fathering Ada Lovelace, and being a hero of the Greek War of Independence. I’m not a great fan of long poems written in old fashioned English, so Byron’s poetic brilliance has passed me by.  Same goes for his contribution to the Greek War – he seems to have arrived and died without doing much in the way of liberating Greece, though the Greeks seem happy enough with him.

He does, however provide me with half my knowledge of Assyrians, which came in handy when viewing this blog. It’s an interesting post, with excellent pictures of Assyrian carvings.

The Assyrian came down like the wolf on the fold, his cohorts were gleaming in purple and gold.

If you want to read a good book which includes Byron’s final years you can do worse than read Lord Byron’s Jackal. It’s an excellent book about Edward Trelawny, friend of Shelley and Byron, liar, raconteur and bandit chief. As the man who ordered Shelley’s boat and who went to Greece with Byron he probably did more damage to English Literature than Mills & Boon.

The reverse inscription comes from the poem The Prisoner of Chillon. It’s depressing and it’s long, so I linked to Wikipedia instead of the poem itself. 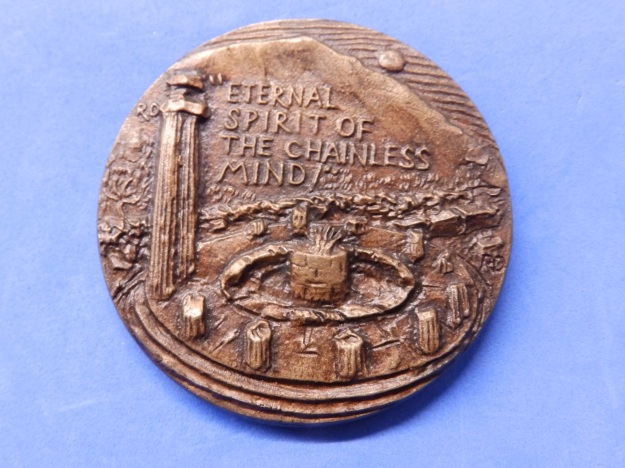 The Prisoner of Chillon – a deadly dull poem

The medal, as you can tell from the label in the lid, is by Ron Dutton. He’s a moderately well-known designer of art medals and designed the reverse of the 1999 £2 coin which commemorates the Rugby World Cup.

I saw one of these medals at the recent Numismatic Society meeting and, when someone mentioned they would like one I said we had one in the shop. The collector who had given the talk immediately jumped in to tell the interested party ours was too expensive, as he had bought his in auction for a quarter of the price.

This shows the elasticity of price in collecting circles. Our price was fair for a modern art medal, but to a collector, it seemed expensive. Things often seem expensive to collectors, but when they come to sell them they are always happy to accept a profit. Five days later someone bought it off our eBay site.

It just goes to show… 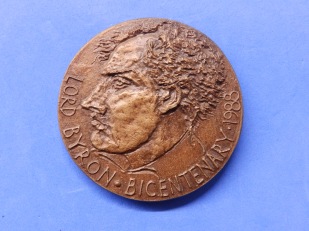 I particularly like well-made Victorian medallions in their original boxes, but that’s just another case of me having champagne tastes and a beer income.

So here are some medallions we put on eBay this week.

First up is Canterbury Cathedral, a well-struck high relief medallion with lots of detail. It’s not the most inspiring subject but it’s done well and there’s an aura of quality hanging round it. This aura obviously communicates itself electronically as it has already sold. 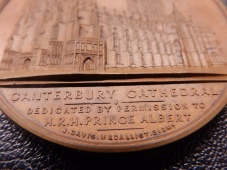 The next one commemorates 21 years of the Volunteer Movement. Founded in 1860 as a reaction to political tensions with the French, the Volunteers built on the tradition of local units raised in Napoleonic times. After nearly 50 years they became the Territorial Force in 1908 and they are now known as the Army Reserve. Each incarnation has seen them become more serious and slightly more removed from the local community. I suppose that’s progress.

Still in the original box after 140 years

It really is excellent detailing

It is an extremely well-struck medal and this particular example has traces of original lustre and the box of issue. The box has seen some wear over the years but retains its original velvet and silk lining.

On the reverse, St Michael guards a woman an children, supported by three warriors representing England, Scotland and  Ireland. You can tell this from the rose, thistle and shamrock on their shields.

The final medal was produced by the Royal Mint in 1990. It’s good for a modern medal, but still suffers by comparison to proper, old medallions. It commemorates 200 years of lifeboat design. I like it because it has an interesting historical subject and it’s treated with enthusiasm (even if it does have a dull, low-relief reverse).

-Of all the heroes we’ve ever had, you’ll have to search hard to beat a lifeboat man, as this link shows.