It’s taken five days and a lot of sneaking about, but I finally managed to get a picture. It’s a bit misty, but that’s what happens when you take photographs through a dirty window. 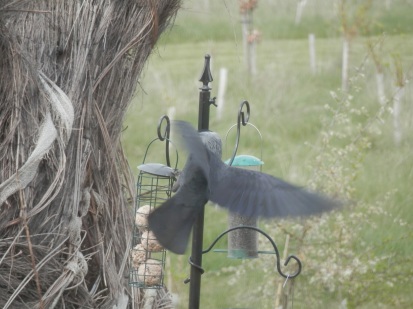 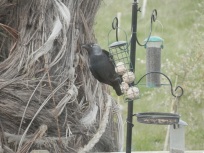 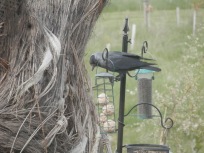 The flowers are starting to come out too, though spring in this area is advancing by halting steps.

The goosegrass is doing well and this year I’m going to try eating it. I’ve just tried a few bits raw and though the hooks do give it a strange texture it wasn’t too bad, with a bit of a pea taste. I’m going to check out some recipes and give it a go on Wednesday. Will also be picking the first of the nettles for soup and quiche. They say that real men don’t eat quiche, but I’m not sure if that still applies when you make it with nettles.

Purple dead nettles are both showing well, though there is no ground ivy yet. Of the staples, we don’t have much chickweed yet and the mallow hasn’t really started. There are a few borage plants starting to show but no Fat Hen yet. 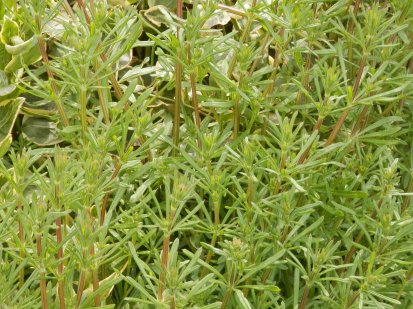 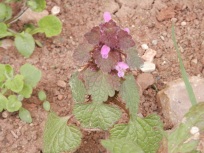 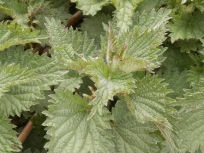 I will add things to the Wild Food page as I try them. I’ve just been making a few additional notes – things like Fat Hen soup was OK and never eat stonecrop, though to be fair I don’t suppose many people will try eating stonecrop. You have to be desperate for content to do that.

More later, but I’d better get back to “proper work” now.

It’s 4.30pm on Saturday (though I won’t be posting until later), or 1995 if you follow the other form of dating I’ve been using. In 1995 I’m married with kids, happy and couldn’t tell you what was happening in the outside world because I didn’t have time to notice.

Wikipedia tells me that John Major called a leadership election to confirm his leadership of the party. I mention this only because it gives me chance for a John Major anecdote. I met him once and was introduced. About an hour later I met him again and he remembered my name. There was no need for him to have done that and it struck me that a man who could remember names like that, and appear to be pleased to meet you for a second time, would probably rise high in politics. He did.

There’s probably room for a whole digression on leadership and what it takes to succeed in politics here, but it wouldn’t be as interesting as cookery and gardening. I wish I’d realised that years ago.

Here are some pictures of a Wild greens quiche with guinea fowl eggs. My wife is making me describe weeds as wild greens now. Some years ago we went through a similar process with a product I now call “manure”.

It’s onions, blanched nettles and fat hen in  a ready made pastry case. After adding the eggs and milk I dropped torn up chive blossom, calendula petals and whole borage flowers to the top. I will have to work on preserving the colour of the petals. 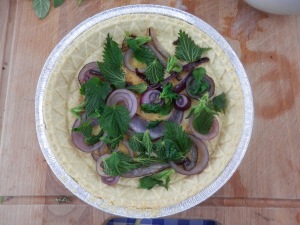 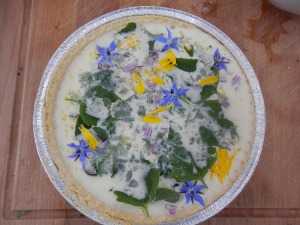 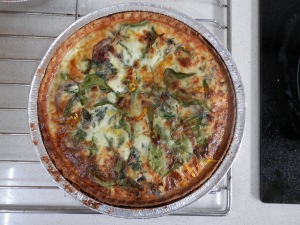 The water I blanched the nettles in took on a lovely green colour after just a minute or two of steeping and after removing the leaves I drank it. Much nicer than the cup I made earlier in the week, and much fresher tasting, though it did have overtones of calabrese. Compared with overtones of fox I’ll go for that.  With hindsight I should have strained the insect shaped bits out of it, but I’m not a vegetarian so no harm done.

We have another school next week, a planning session, part one of my takeover of the catering side and I’m going to do some cuttings with willow water. The comfrey plant food is decidedly murky now – you wouldn’t want to swim in a pond that colour- and the indoor salads are really getting a move on now, in contrast to the disappointing outdoor salads.

Finally, after seeing my display of Wild Salad at the Open Farm Sunday I’ve been asked if I can do one at a buffet in  a few weeks time. My weedy fame is spreading!

It was the baking group again today, though they were slightly thinned out by holidays. It’s always good to see them because they are a happy lot. This is good when you’re baking (as some of my attempts have been horrendous and several, despite exhortations to “re-use the dough” have ended up in the bin – sometimes scraped from my fingers, and sometimes propelled with at speed). The fact that Focaccia was bread of the day was a bonus. It always smells so good.

I wasn’t baking today – I lost my baking mojo a while back and my enthusiasm has faded. I need to start getting it back now, particularly as several schools have been asking for bread making as an option when they come to visit. The smell of freshly baked focaccia and rosemary is just the sort of thing to bring back that enthusiasm. Not that I’m overly enthusiastic about the school sessions – it can be a bit of a dull day for the kids when you keep dragging them back into the kitchen for the next stage. 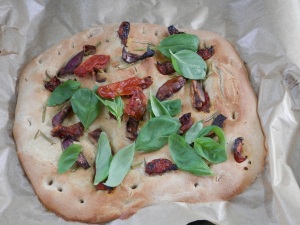 That reminds me, I have a teacher to ring back.

At the end of the session I gave out nettle soup. One or two slunk out without taking any (though I bear no grudges) but several drank it cold there and then and the rest took pots home with them. I’m easy with foraging and can take it or leave it, but it’s good to produce food from found ingredients and to introduce people to new experiences. It’s also, as somebody once said in a book, good to eat foraged food once in a while because it gives you a range of nutrients. However, there are reasons that we eat spinach instead of nettles, with the stings being just one of them. 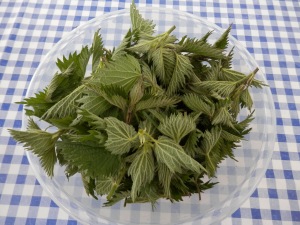 I have actually set myself a target of learning something new every day this year. My learing for today was that I didn’t know how to spell focaccia. In fact I just had to check it after writing that.

Finally, can anyone tell me how ro swirl cream into soup and have it still look good by the time you’ve switched your camera on. In an effort to raise my game last night I swirled the cream, sprinkled the freshly picked chives and took this picture that looks like a curdled face. 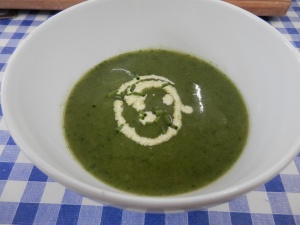 Great day today, if you have the soul of an accountant. I hope I don’t.

We had a couple of teachers to show round today. They are really very nice people it was a pleasure to see them. They will be reading this shortly so I’m not going to say anything else, am I? They’ve been bringing groups for a few years now so they must think we do a reasonable job. They did look a bit nonplussed when I suggested feeding the class a plate of weeds but they soon picked up when I revealed nobody has died from it. Yet.

That was the start of the paperwork – checking food allergies and risk assessment. None of this actually stops us killing a child on a visit, it just means that if we do we can escape most of the consequences by pointing out all the paperwork is in order.

Obviously the parents would be unhappy and it wouldn’t gain me any friends at the school if I sent one of their pupils home in a box. To be fair, I have never killed anyone on a visit yet, and don’t intend to: have you seen the paperwork that sort of thing generates?

I’ve now moved on to sending out booking forms and entering new bookings on the calendar. I don’t know where the time goes, but by the time it’s all checked, cross-referenced and explained that five-minute job seems to take an age.

It’s a tough choice – drowning in paperwork, ten feet from a kettle and warm. Or cold, in the middle of a field, picking up kestrel pellets from the base of the neighbours statues. According to the weather station it’s now 4 degrees Celsius outside and there’s a moderate breeze.

Those kestrel pellets can wait.

When you think of salad you probably think of lettuce, or possibly rocket. If you think of chickweed or fat hen you’re in a minority, and you probably don’t need to read this. Fat hen, incidentally, contains twice as much iron as spinach, so eating weeds does have something to offer nutritionally.

In an hour or two I’m going to be taking a party of Rainbows round the garden to see what we can find to eat. We have a good crop of chickweed growing in a newly-composted raised bed and plenty of mallow. There is definitely some fat hen round by the edge and we have plenty of marigold and nasturtium flowers. We also have dead nettle , borage and dandelion so without resorting to anything from the herb garden we can provide a plate of colourful salad, though I will add some chive flowers for the onion flavour.

We have some nice tender nettles coming through, but although they are edible they are not recommended in salads. I will pause for a moment while you think about it…

It seems we need a permission form signing if we want to feed garden weeds to children, though we didn’t need special permission last week. It’s something to look into, and worth remembering that educating overly-cautious adults is also part of our job.

Strangely, when the foraged food is made into jam and spread on warm scones you don’t need special permission. I suppose it’s a case of familiarity seeming safer than the unknown. And sugar being more palatable than salad.)