Yesterday we had end to end customers, and the same was true today. Earlier in the week we had a Guildhall Coronation Medal brought into the shop with a selection of other medals associated with Guildhall dinners and the Freemasons. We weren’t able to buy them, though we did buy the associated coins. The owner has taken them home to talk to their children and decide what to do. This is an example photograph from the internet as I didn’t think to ask if I could take a photograph at the time.

The photographs below are ones I took of an interesting group of medals that came into the shop today. They represent 38 years in the army, with six tours – three in the Balkans (one with the UN and two with NATO) and three in Afghanistan. The last three medals are the Golden and Diamond Jubilee medals and the Army Long Service and Good Conduct medal. We tend not to give a lot of medals out. The silver laurel leaves are the Queen’s Commendation for Valuable Service, which the recipient was awarded for his services in Helmand Province. 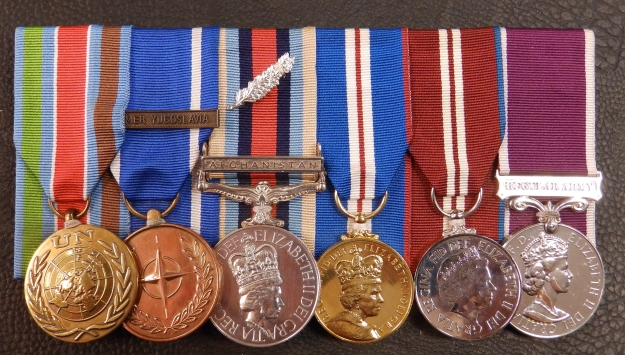 Lots more happened, but that, for me, was the most interesting part. I’m a man who is easily satisfied. 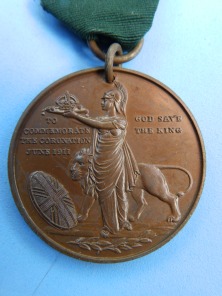 This is the medal that was given to members of the Boy’s Brigade and Boy Scouts who lined the procession route for the Veterans’ Parade in Nottingham during the Coronation celebrations. The Scouts were, at that time, a new organisation compared to the Boy’s Brigade. The medal features two stags with very flat antlers. They have to be flat to allow room for all the wording.

I presume Mrs J A Morrison was the wife of J A Morrison DSO, who was MP for East Nottingham between 1908 and 1912, and was host of the dinner.

There is a book which lists the names of the war veterans who went to the dinner, which was held at the Empress Rink, King Edward Street, Nottingham. The skating rink is reported as burning down in 1910 and being rebuilt as a cinema, which opened in January 1913 so I’m not sure how it hosted the dinner in June 1911.

There were 1,600 veterans, with 2,475 medals between them. The oldest veteran was 90-year-old E Pratt of the 17th Foot, who lost eight toes to frostbite in the Crimea.

Each veteran was given a copy of the book as a souvenir, with Stewards being given silver jewels (which I have seen, though never been able to photograph), and Captain Morrison, as he was then, being given a gold and enamel jewel.

Edit: This is a link to the catalogue archive of auctioneers Dix Noonan Webb showing a picture of a silver stewards jewel.

There was a time when dealers used to have junk boxes full of clapped out coins, broken bits and base metal medallions. I certainly did. When I bought mixed boxes at auction the detritus from the bottom, after being carefully checked, would end up tipped in the junk box.

When buying, the junk boxes of other dealers were my natural habitat. I’ve bought some good stuff out of junk boxes. It seemed like they would never end. Then ebay came along and  it all ended up on line.

The contents of the box could cover anything from ancient coins to petrol station giveaways, via Georgian medals, Victorian adverts and pre-decimal coins. One of the staple items was the mass produced commemorative medal. They really started in a big way with Queen Victoria’s Golden Jubilee in 1887 and ended in the 1930s with a flurry of royal events – George V’s Jubilee, the abdication (though this is shown only by the  items of Edward VIII (which aen’t really rare, whatever dealers may say) and, finally, the coronation of George VI. 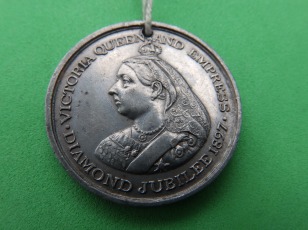 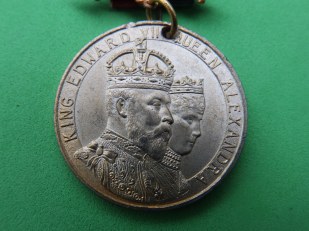 This is the Edward V!! medal from Nottingham – note the foresters supporting the coat of arms. 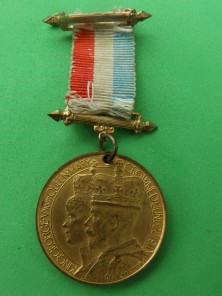 The colour changes for 1911, as do the supporters on the coat of arms, but the general idea remains the same. There is a second version of the medal, often known locally as the unofficial version (see below). 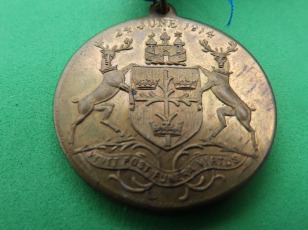 There is a medal very similar to the 1911 coronation medal – made for the 1914 Royal visit. It isn’t just in recent years that the Royal Family has been unpopular, there were seven attempts to assassinate Queen Victoria and one on Edward VII. In 1914, to encourage public approval George V embarked on a programme of visits. I’ve seen the itinerary for his visit to Nottingham – he visited Arnold and Mansfield too, though I think he just waved at Arnold in passing. 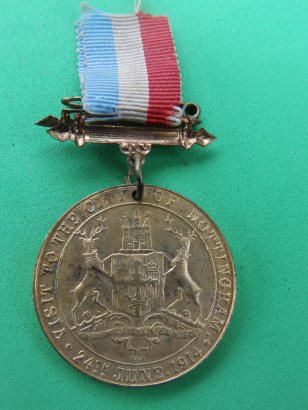 Royal visit to Nottingham (above( and Dundee (below).

Things seemed to tail off after that, with a much smaller selection being produced for 1953. To set it in perspective, rationing was still in force in 1953, and the fledgling Matchbox company struggled to produce model cars when metal supplies were diverted to fighting the Korean War.

This is one of the later medals, from Mansfield Woodhouse.

I have plenty more to show you yet, so don’t worry about me running out for the next few weeks,