I mentioned cream teas a couple of days ago, and was asked to provide more details. It seems that the concept of the cream tea hasn’t travelled to America, which is surprising as it contains a lot of fat and sugar, which are what I consider to be two of the main ingredients in American food. Looking at the Wiki entry for clotted cream it seems it would be classed as butter in the USA, which would really confuse things.

The cream tea as we know it dates back to the 1850s, according to the Cream Tea Society. Other sources cite dates of 1931 and even 1964. The latter date is cited by the OED, and I can’t say they’ve exactly covered themselves in glory in this case. I’m sure I’ve seen references to them in the 1920s and 30s (whilst reading classic crime novels and I will make a note when I next see a reference – I haven’t made one before because I didn’t realise I would ever need the information.

There are even references going back to the 10th century.

My mother, who worked in a farm tea shop at weekends in the dim and distant past, remembered making cream teas well before 1964.

The normal cream tea consists of scones, strawberry jam, clotted cream and tea. There is a traditional Cornish version which uses Cornish splits, but I’ve never actually seen one. In the south west I’ve often had it with plain scones, though in the rest of the country it’s usually a fruit scone.

I’ve also had other jam, and in fact I do like apricot jam with my cream tea.

There’s no such latitude with the cream. Cornish Clotted Cream  is a protected product and can only be made in Cornwall from milk produced in Cornwall.

As for the tea to accompany it, I noted that at TESCO you can pay extra and have it with coffee. I’m not sure why, but my view of coffee is not a positive one. Any beverage that is improved by passing through the digestive tract of a weasel is not really one for me.

It’s like the milk in first debate – there is no right answer. 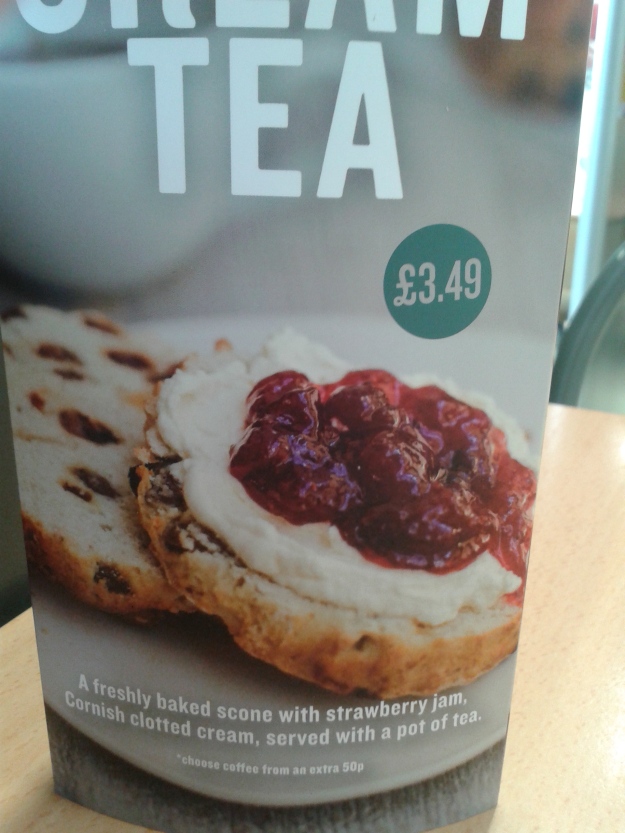 Note that they serve it with jam on top. In reality the jam provided with the cream tea has no chunks of fruit in it, so doesn’t look quite so attractive.