Fortunately my reserve of cheese has been able to make up the deficiency. The good thing about cheese, apart from the fact that it tastes good, is that it’s virtually interchangeable with ham. You can use tomato relish and Branston pickle on it, and if you make Welsh Rarebit you can even pair it with mustard. They can both go in omlettes, on pizza and, if you really must, in salad.

If I ever have to make a choice I may have to go for cheese, as it can go in Welsh Rarebit, as previously mentioned, and cheese on toast.

Talking of Welsh Rarebit, which makes cheese on toast into a meal instead of a snack, I was surprised to see how complicated it can be. I whisk a drop of milk into some grated cheese whilst heating gently, add the mustard and it’s ready. Sometimes I add Worcestershire Sauce and black pepper. Sometimes I don’t.  No beer, no flour, no fat, no roux. 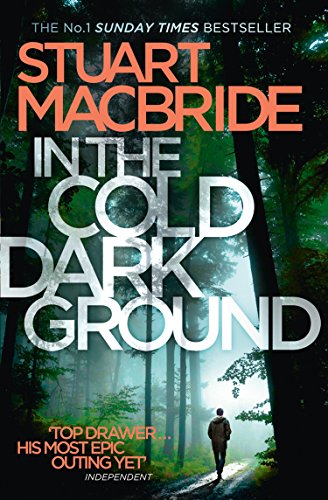 The tie I have saved by not shopping for more ham was spent reading an excellent crime novel – In the Cold Dark Ground by Stuart MacBride. It’s the 10th book in the series, and I’ve missed a few out, so I had a bit of catching up to do. That’s the trouble you have if you hate paying more than 99 pence for a Kindle book.

It’s Tartan Noir, with lots of Scots and violence plus dark humour, exhuberance, convolution, complication dialect and a pig farm.

Sometimes it’s a bit over the top, and sometimes a bit irritating, but generally it’s a great book in a great series. When I get caught up with my reading pile I might buy a few more in the series. I’d go so far as to say if I could only take one crime series to a desert island it would be this one.

Thanks to Amazon for the picture again.

I’ve written about tsundoku before – the habit of piling up unread books. It was brought into painful focus earlier today when I opened up  a box of books that has been undisturbed for several years. For “several” you could probably substitute “ten” judging by the publication dates.

When I read The Elements of Murder  last month I was surprised at my familiarity with poisons and notable poisoning cases. Not only surprised, but quietly impressed with the breadth of my knowledge.

So when I found a copy of the paperback edition in the box today it was a bit of a downer. Not only is my knowledge based on reading the book ten years previously, but my memory is in fact so bad I didn’t remember buying the book twice.

It’s also a reminder that when I pictured the seven books in the photograph I was intending to review them swiftly. I’ve actually managed two and started two more. I haven’t even finished reading one of them. But I have bought more, and read several of them.

I suppose this officially the start of old age…

I’ve confirmed my hospital date, I’ve eaten cake from one of the neighbours and I’ve bought socks with grips on the bottom. They seem to be the preferred footwear in hospital these days. They did lend me a pair last week, but as usual they don’t do my size. It’s not as if I have fat feet, just a size or two bigger than average.

I’ve also written a book review, made up my diary, developed a system of paperwork and exercised my bad foot. The “system” consists of tucking current papers into the back of my diary and putting an elastic band around it all. Once the paperwork is no longer current I file it in a plastic folder as this makes it easier to lose in bulk. The “exercise” consisted of walking to the fridge and answering the front door to accept the cakes.

From this I presume you can see why Julia laughs in an ironic manner when I refer to the future date “when I retire”.

She has had a fuller day than I have, preparing for a job interview, holding a meeting at the community accounting group she chairs and doing associated paperwork.

However, because I have used more words to describe my day it looks like I’ve been busier than she has.

I suppose I should have taken a photograph of the cakes. They were miniatures for an event tomorrow, the open day at the hospital garden. Hopefully the weather will improve as they put a lot of effort into the gardening. I may give it a miss, as I’ve seen it enough recently, but Julia is going.

The picture is a Herring Gull walking on the top of my car in Llandudno. Fortunately the recent rain has washed away the other evidence.

Free Country: A Penniless Adventure the Length of Britain

I’ve read a few books of his sort (which I think of as novelty travel, or even annoying novelty travel) and have mixed feelings about the genre.  Is it really necessary to do more than travel and write entertainingly? Do you need to take a fridge with you, or in this case, do you need to start off in your pants and beg your way the length of the country? Not that it really matters, because charity shops are full of these books and they rarely cost more than £1.50. At that price I can adapt to most things.

Part of the problem is that everything seems to fall into place so easily, finding footwear before doing any serious damage to their feet for instance, and the other is that a lot of the stuff they are given is the result of theft. They may be amazed at the generosity of staff in large chains, but actually, that’s theft. Same goes for the employees of smaller establishments who give them free drink or food while the boss is away – theft.

George Mahood thinks the penniless journey is a demonstration of the basic decency of human beings who are selflessly prepared to help two idiots on their way from Land’s End to John O’ Groats.

I think it’s about finding a gimmick to base a book on.

It’s beginning to sound like I don’t like the book, but nothing could be further from the truth. It’s a good book, with well-observed characters, warmth, moments of peril, light and shade and humour. I did follow them with bated breath, I did worry about them, and I was rooting for them, despite my moral misgivings.

It was a birthday present from Number One son and arrived in the post whilst I was in the grip of several different infections (the advancing years are not being kind), so I left it for a week before picking it up.

Once I started it I finished it in two sessions and was really sorry to reach the end.

Judged from a moral standpoint – theft, begging, fecklessness and having defective brakes – it’s hard to give it more than three stars, but from a reading point of view it’s a massive five.