I’m going to give you a rest from my general tales of doctors and disasters, though I will mention that it was very quiet in the shop today. That was because, unlike most retail outlets, we don’t have a Christmas rush. Collectors tend to wait until after Christmas and then come to us to spend their Chritmas money. Today, like most men (because 95% of coin collectors are men) they were being dragged round town by their wives (because 95% of women are far too keen of Christmas).

For proof of that last point I offer Julia as evidence. I went to work this morning. She went to a Christmas Craft Fair in our local park, took pictures of reindeer (and their painted backdrop), then went to the gym, returned home and put the Christmas tree up. I’ve managed to cut us down to a small artificial tree over the years, but still can’t persuade her that 24th is early enough to put it up. 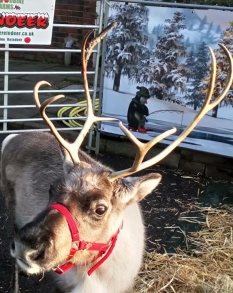 We also had three sales on eBay – yes, we have 1,400+ items on eBay and we sold three. And we couldn’t fulfill one of the orders because the customer added an impossible request by email. We had four more plus a telephone order during the day but it’s hardly a sparkling performance.

After work I picked Julia up and we went for tea and toasted teacakes, did some shopping and one of us read the newspaper while the other one looked at Christmas jumpers. As I read (you surely didn’t expect me to be looking at the red, white and green sparkly monstrosities, did you) I found this story.

I agree that the banana is, as pointed out, a symbol of many things, including (which they didn’t mention) the problems of cloning and monoculture.

If you want your very own copy of this artwork, I’m doing a pre-Christmas special offer of just £1,000, giving you a saving of £90,000 on the price of an original. And for that I’ll even come round to any address on mainland Britain and install it for you.

Or, as part of my newly developed franchise idea, send me £500 and I’ll send you a hand of bananas and a roll of gaffer tape.

I don’t know if I’ll make any sales, but I thought it was worth mentioning in case any of you were looking for an emergency present idea.

I’m seriously thinking about my diet, and can’t shake the idea that a grimmer breakfast would probably be better for me – porridge or bran flakes for instance. (I’m expecting a Scottish backlash about the porridge, but it’s grey and with the traditional water and salt it’s hardly luxurious.) It’s always tempting to say that porridge is the world’s only grey food, but according to this link there are others.

We moved on to collecting cardboard from a market stall. Julia had arranged that on Saturday as she needed cardboard to supress weeds in the polytunnel. There’s an area at the back of the raised beds which isn’t easy to reach so she’s choking the weeds with a mulch of cardboard and wood chip.

As it was a nice day, and  we then set off for the coast. The curse of the mobile phone then struck, and to my dismay I heard Julia arranging a meeting for the evening at a time that we couldn’t possibly make if we went to the coast first.

I don’t think she really understands the concept of “day off”.

And that was how the day failed to live up to the promise of the Three Fruit Marmalade start. 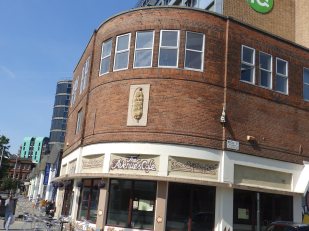 The Sneinton market area has been a busy centre for the fruit and vegetable trade since the 1850s when the original market was built on the site of a clay pipe works. It was improved in 1938 andmore buildings added in 1957. That was when the Fyffes warehouse was built, complete with its sculptural bunch of bananas. Julia has been meaning to take a picture of the bananas for years, so here they are.

The wholesale market was relocated again in the 1990s, leaving a small remnant of a market and a numbr of small business units.