Do you remember around a month ago I lost a camera card? At the time I said it held some great photos of Whitby.

Well, I found the card. Unfortunately I found it while looking for another card which I dropped. I found the old one, but now I can’t find the one I dropped. To make things worse, the photos aren’t as good as I thought they were as the light was going and many of them are blurred. Added to that the composition and effects didn’t seem as good as I remembered.

It’s always the same isn’t it? As Shakespeare pointed out, old men remember with advantages. Or in sporting terms – the older I get, the better I was.

To add insult to injury I just posted a half-finished post – I just can’t get used to the Publish button being next to Post Settings.

Graveyard at Whitby – can you see Dracula yet?

I used several of the buttons for altering the camera settings as it was growing dark and it’s very tempting to add to the general Dracula feeling of the town by using the “dramatic” setting (though it really just darkens things).

The new memorial was erected in 2013 when people realised that there was no town war memorial, apart from the War Memorial Hospital, which had been demolished (though the original plaque was moved to the new hospital) and the memorial boards in the church. I think they really meant there was no place for them to hold a ceremony.

It is made from Norwegian green granite, which is significant as the local regiment (The Green Howards) served in the Norwegian campaign in 1940. The campaign lasted 62 days, which doesn’t seem long but, according to Wikipedia, was longer than any other nation resisted the Germans apart from the USSR.

This seems unfair on Norway as I’m pretty sure that the USSR started by dividing Poland up with the Germans, so their record of resistance is patchy.

Finally we have an attempt at an arty shot of crab pots and a portrait of Julia taken as an experiment. 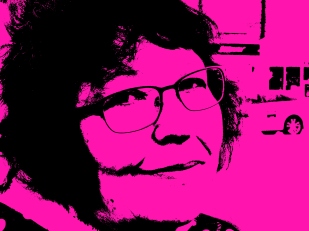 I told her it was on “Portrait” 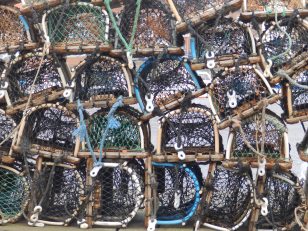 Fishing gear on the quay – Whitby

I think I may stick to portraits and crab pots in future as pictures of War Memorials encourage thoughts of politics which is bad for my blood pressure.

14 thoughts on “The missing Whitby Photos”