Do you remember around a month ago I lost a camera card? At the time I said it held some great photos of Whitby.

Well, I found the card. Unfortunately I found it while looking for another card which I dropped. I found the old one, but now I can’t find the one I dropped. To make things worse, the photos aren’t as good as I thought they were as the light was going and many of them are blurred. Added to that the composition and effects didn’t seem as good as I remembered.

It’s always the same isn’t it? As Shakespeare pointed out, old men remember with advantages. Or in sporting terms – the older I get, the better I was.

To add insult to injury I just posted a half-finished post – I just can’t get used to the Publish button being next to Post Settings.

Graveyard at Whitby – can you see Dracula yet?

I used several of the buttons for altering the camera settings as it was growing dark and it’s very tempting to add to the general Dracula feeling of the town by using the “dramatic” setting (though it really just darkens things).

The new memorial was erected in 2013 when people realised that there was no town war memorial, apart from the War Memorial Hospital, which had been demolished (though the original plaque was moved to the new hospital) and the memorial boards in the church. I think they really meant there was no place for them to hold a ceremony.

It is made from Norwegian green granite, which is significant as the local regiment (The Green Howards) served in the Norwegian campaign in 1940. The campaign lasted 62 days, which doesn’t seem long but, according to Wikipedia, was longer than any other nation resisted the Germans apart from the USSR.

This seems unfair on Norway as I’m pretty sure that the USSR started by dividing Poland up with the Germans, so their record of resistance is patchy.

Finally we have an attempt at an arty shot of crab pots and a portrait of Julia taken as an experiment.

Fishing gear on the quay – Whitby

I told her it was on “Portrait”

I think I may stick to portraits and crab pots in future as pictures of War Memorials encourage thoughts of politics which is bad for my blood pressure.

While we were in the Fens on Wednesday, as you already know from previous posts, I took a few pictures of Crowland Abbey on the way past. A photogenic ruin, stone faces and a graveyard – hard to resist.

The Abbey was founded in memory of St Guthlac early in the 8th century but destroyed by Vikings in 866, an earthquake (1118) and three fires (1091, 1143 and 1170). It wasn’t all bad though, the isolated Fen location kept it safe during the civil disorder of the Middle Ages and allowed it to accumulate considerable wealth.

St Guthlac is depicted in this photograph – he’s holding the whip he used to drive the demons off the island (which is what Crowland was before the drainage of the Fens).  That’s not a blemish in the archway by the way, it’s a Jackdaw flying by.

This is a cropped and enhanced piece from the picture above it, showing a close-up of St Guthlac, now protected from birds by netting.

The West Front, with its fine selection of statues was completed between the 12th and 14th centuries. Given time I could probably identify most if not all of them. I could also date statues and heads from the fashions they are wearing. That, however, is a project for the future. I need to know more about church architecture before I start on fashion of the Middle Ages. 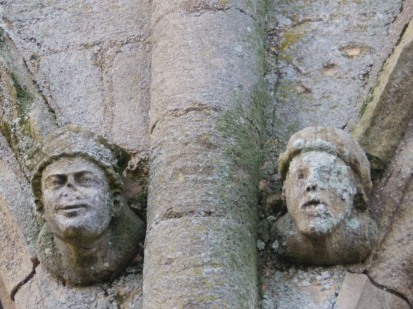 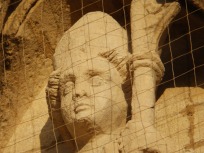 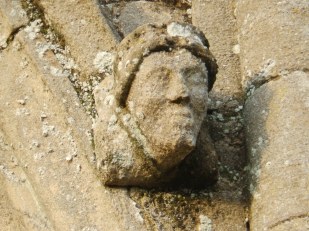 We gaze on wrecks of ornamented stones

I’ve run out of ideas for titles, so I’m drawing on the poetry of local “peasant poet” John Clare.

This is  Crowland Abbey. It’s now the parish church of the town of Crowland in south Lincolnshire but it used to be an important religious community with large property interests. This came at a price, including a Viking raid, riots and law suits (often featuring the Abbots of Spalding and Peterborough) before Henry VIII finally dissolved it in 1539. This wasn’t something unique to Henry, as other countries had also seized monastic assets, including Sweden, Denmark and Switzerland.

THe sun goes down…

Looking towards the football fields 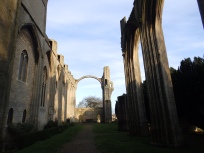 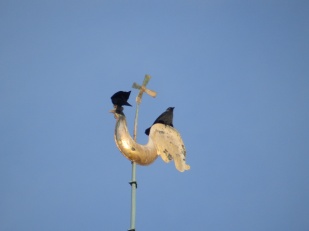 Having already been used as the parish church for years, parts of the building were set aside as a church, whilst the rest was demolished and reused. Sorry I can’t be more precise, but as I can’t tell a nave from a narthex I’m obviously going to have to brush up on church architecture.

The quatrefoil shows scenes from the life of St Guthlac. He was a soldier and a member of the Mercian nobility who retired to the monastery of Repton at the age of 24. Two years later, in 699, he gave up this life to live at Crowland as a hermit.  He wore skins and lived on bread and water, passed his time praying and battling demons and, eventually, died in 714.

What is now the church was originally the north aisle. The other bits have gradually decayed, probably having suffered from Parliamentary bombardment in the siege of 1643. Oliver Cromwell is often blamed, but he wasn’t actually in command that day and as a I do feel that he gets blamed for more destruction than he actually accomplished. As it was 1720 before the nave roof actually fell in, it’s likely that time did as much damage as cannon balls. Let’s face it, the Victorians did more damage to churches than Cromwell ever did.

Despite all this, it’s still an imposing building, and much more dramatic with the ruins than it would be if it was just a neat and tidy church.