Well, I’ve updated the gallery page with a slideshow, if you’re interested, and I’ve re-read Part 1 and realised that I may have been slightly less than accurate in my comments on butter making. It’s easy, as I said. However, twice it has proved to be impossible. I did it as a unit of a PTLLS course I took some years ago – the cream was hot from being in the back of the car and the evening was humid and the classroom unventilated. After half an hour of shaking, as I showed signs of passing out, they decided to let me off that bit. It still took me an hour after that to stop shaking. The other time was similar, hot and humid day, trying to make butter at a care home. Fortunately, with a clientèle that were all around 90 we were able to nip to the kitchen and substitute butter from the fridge without anyone spotting it.

So, butter making is generally easy. Apart from when it isn’t.

I’ve just been run into the ground by 23 Brownies. I don’t think I could cope with being a Brownie leader – the enthusiasm is great, but I don’t have the energy to keep up!

It’s also trickier doing the visit on your own, but as Julia was working at her “proper” job tonight we didn’t have much choice. What is a seamless performance with the two of us working like a well-oiled machine (I may be exaggerating a bit here), becomes a touch fraught as you have to prepare everything in advance and go from one to the other hoping that it all fits together. It just about did. I forgot the picking of herbs and chillies for the soup until I had them all washing their hands in the outside sink so I had to alter my choice of herbs to sage and golden marjoram – those being the ones they could see from the sink.

There was also a bit of  a gap where I needed to serve up the soup, but the leaders covered that for me with a song about gorilla snot. Yes, it was a surprise to me too. 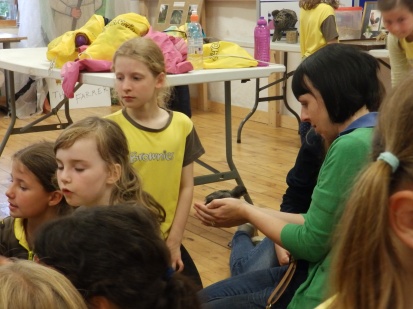 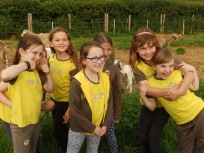 In the end it all went reasonably well, kids and leaders seemed happy, we had no accidents, the animals behaved (OK, apart from the goats) and I’m left with a feeling of well-being as we head into tomorrow and the fifth day. I’ve a few points to improve on but nothing too bad.

List for tomorrow – cream crackers, fly spray (it’s not good weather for those of us with waterless toilets), air freshener (ditto), long bamboo skewers (for our November Project), and bread for lunch.

I think that’s it…