This morning’s journey was like a scene from a sci-fi film. It’s the second time it’s happened, but last Monday we put it down to school holidays. 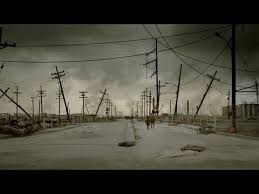 We found ourselves in the middle of an eerie situation where there were hardly any cars about, and no buses. There weren’t even many cyclists or walkers about, so it isn’t as if everyone has changed from cars to other sorts of transport. It was just like one of those films where everyone has fallen victim to a virus and the streets are empty apart from a little litter (which is the post-apocalyptic version of tumbleweed in a black and white western).

(That’s actually a picture from the web, not an accurate representation of Nottingham this morning. Just in case you were wondering.)

It built up a little as we drove through town but even so it was companionable rather than crowded.

I had the time to observe several strange sights, such as a cyclist dressed in purple and pink. Those seem to be the colours of Nottingham Trent University sports teams these days, but you don’t see many adults wearing it. He’s either an ex-student, a man of low sartorial standards, or an early riser who dressed in the dark.

Despite his dress sense he’s clearly a decent cyclist as we passed him within the first 500 yards of the journey and, ten minutes later, he passed us as we sat at traffic lights in the centre of town.

If I was going to breed a race of supercyclists I’d certainly be happy to include him in the programme, though he’d have to be paired up with a woman of highly developed fashion sense in order to breed out his unfortunate tendency to garishness.

We also saw one of the strangest sights I’ve ever seen.

As we approached the Goose Fair roundabout (a term which may mystify those of you who don’t know about the Goose Fair, or about British traffic systems – I was told, years ago, that they don’t have roundabouts in Canada, though this may not be true) I saw a youngish, though bulky woman, on the pavement. She had thighs that were probably twice the size of mine (and mine are ample) and just as white, though I relieve the whiteness of mine with a filigree effect of varicose veins.

I also keep mine decently covered with trousers.

I don’t remember much about the costume, because I mostly remember the beaming smile.

She may have been deliriously happy, demented or drugged to the eyeballs, but, whatever the cause, she was definitely smiling.

She cheered my day up. By the end of the day she will, I suspect have done more for the cause of normal women than all the female athletes and supermodels combined. She’s certainly advanced the case for plus-sized women more than any dry, thin academic talking on TV.

And so, I will now start work with a smile on my face and a song in my heart…

No photos for this, apart from the one from the web, but I’ll try harder for the rest of the week.