By the time we’d finished at the Cash and Carry last night (buying drinks for tonight’s BBQ) and unloaded, it seemed like time for a meal. I decided that we weren’t seeing enough of each other a few weeks a ago so suggested that we went out for a meal now and again, so last night seemed like a good chance to put the plan into action. It’s a bit like a date night but we went straight from work so we didn’t wash and Julia still had paint all over her trousers.

We went to the Lord Ted at Newark. It was good. The staff were cheerful, the service was good, and the food was better than good, though not quite excellent. We had the lamb steaks, which were nice, though one of mine was a bit fatty and the veg (onion rings, grilled tomato and green peas) were not inspiring. We had to explain what an Irish coffee was (and it came with squirty cream on top) so when I see taht it rates 3.5 on Trip Advisor I’d have to agree. Squirty cream should not be seen on anything apart from jelly and novelty burlesque acts, though I’m too old to bother about either of these. (A little voice at the back of my head is saying “You’re never too old for jelly” but I’m going to ignore it.)

What really sticks in my mind is the young woman on the table behind us (because the staff follow the deplorable practice of pushing everyone together instead of letting us space ourselves out). She had a piercing voice, no internal censor and nothing of interest to say. You couldn’t ignore that voice so the choice was to ignore her or ask the waiter if they had a baseball bat on the premises. Some gems – “my salad’s warm. It shouldn’t be warm”, “that’s mayonnaise, I ordered salad cream” and “the only restaurant I don’r complain in is X”.

I’m bashing this out before starting to prepare the salads for tonight and lighting the outside oven.

If I’m lucky I’ll have more time to blog, if not expect today’s to be written tomorrow. Meanwhile, here’s a link to the Hampton Court Garden Festival Scarecrow Competition – it’s a bit better than ours. That’s where all our bubble-wrapped scarecrows went, though they don’t appear in the pictures. They are coming back soon so we’ll have posh scarecrows for the allotment. 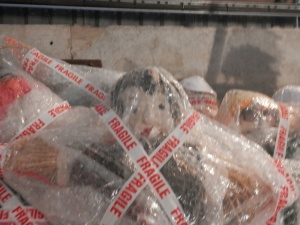 All packed up ready to go

And a picture of some of our garden produce.

Selection of garden produce – you won’t see stuff like this in shops!