I found out about how to unpin the post I mentioned previously. It didn’t take much in the end, I looked at the page as I was getting ready for a new post, saw it was marked “sticky” and prodded a few random buttons until it cleared.

Today’s main project was writing up a collection of prize medals belonging to a dog breeder who appears to have had a good deal of success in France in 1924 and 1925.

If you want a test of your creative writing skills try writing up a pile of dog prize medals in an attractive yet accurate way. They are lovely medals, but they are a real test of writing skill.

I’m also working on a drop-down menu for Royal Visit medallions. These used to be quite popular before the Great War. These are some of the better ones.

This is for the Royal Visit to Derby in 1906

This is for the opening of Kew Bridge in 1903

When all the fighting was done, the UK decided to have a national Peace Celebration. The selected day was Saturday 19th July 1919. This was a little optimistic as the Great War was not officially over when they started the planning, and we were still engaged fighting the Bolsheviks in Russia. We were also still fighting amongst ourselves, with mutinies in Southampton, Calais and Kinmel and tanks on the streets of Glasgow.

There was trouble during the celebrations too, with the riot at Luton being the best known. The town museum, as I remember from a visit many years ago, has a livelier version of events than The Guardian. They blame trouble between the The Discharged Soldiers’ and Sailors’ Federation and the Comrades of the Great War, followed by a riot which involved looting a piano shop and playing Keep the Home Fires Burning after setting fire to the Town Hall. The two ex-service organisations had different political outlooks, the Comrades of the Great War being set up as a right wing alternative to The Discharged Soldiers’ and Sailors’ Federation. Eventually they were to resolve their differences and become founder organisations of the British Legion.

Part of the Peace Celebrations featured the giving of medallions, often in white metal, to local school children. Unlike 1911, Nottingham didn’t produce a medal. The Nottingham Peace Celebrations provided sports, cinema visits, fancy dress parades and teas for 30,000 children, though there is no mention of medals, apart from sports prizes.

Some places provided generic medals, though others were specifically made for individual towns and villages. The Derby Peace Medal in the header page is one of the better examples of design – featuring the badge of the local regiment. 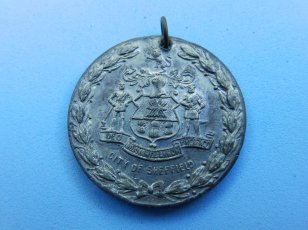 The Sheffield medal is more typical, with a generic figure of Peace on one side and the city coat of arms on the other side. 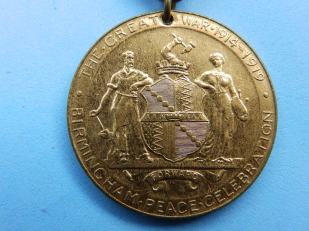 The Birmingham medal is slightly better from the design point of view – I’ve always liked this representation of Victory. It features on a generic peace medal, with an agricultural scene on the reverse, which was the first of these medals I ever had (given to me by my grandfather back in the 1970s).

This is the obverse and reverse of the Derby medal.

Note: I’ve added a link to the previous post to access a picture of the 1911 silver steward’s jewel.