Yesterday was probably rock bottom. I simply sat round doing very little and, just after midnight, I realised that I’d failed to post. In fact, I’d failed to do anything much.

I say it’s probably rock bottom, but I can’t guarantee this – there is always the chance it could be worse. At least I was still wearing trousers. I have a couple of pairs of jogging bottoms upstairs, so there is still potential to sink further.

Today I am wearing trousers and have already accomplished more than I had done by this time yesterday.

We did pop out yesterday afternoon, going to TESCO for our Click & Collect order. The system was slightly different from the one last week. We had to travel to Toton last week. They have a small building, two men and you load your own shopping. We went to Top Valley yesterday – they have a canopy with a van parked under it, one man and he puts it in the boot for you while you sit in the car. 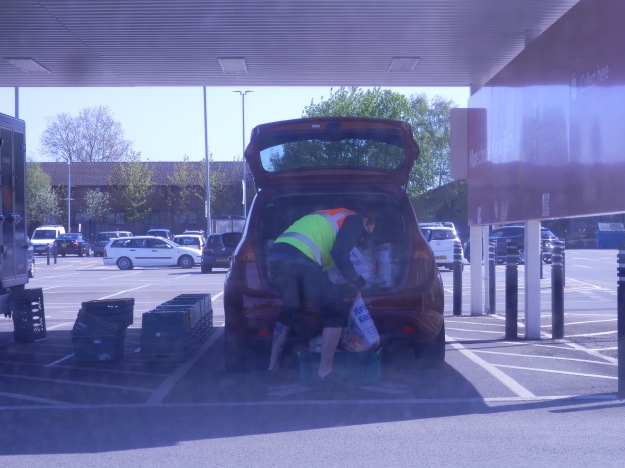 It only took 20 minutes and we only had contact with one man. It’s not a bad method of shopping. However, it did have one drawback as there were several items lacking. They take your money, they confirm they have it, they clearly have it in stock, but they don’t have a system for turning this into reality.

I bought white rolls, to make bacon cobs, which arrived squashed, which was disappointing. Even worse, the Belgian buns arrived crushed. I’d bought them as a special, sticky treat and was much put out when they arrived with the icing spread all over the packaging.

It’s yet another downside of shopping by remote control.

Despite this I still checked for a delivery slot on the internet. It’s become a habit, possibly even a fixation. And, again, after several disappointments, I managed to find a delivery slot at ASDA. It’s for 5th May, which is only 5 days after my previous slot, but beggars can’t be choosers. I could, in theory, have left it for someone else, and waited to see if I could get one for the 7th. However, nobody seems to have bothered leaving one for me over the last month, and they have been buying all the flour, so I pressed the button.

It’s nice to think that the current difficulties will make us all better people but I’m not sure this is going to be the case with me. The fact that I avoided panic-buying and bought modestly for the first few weeks of the shortages did not leave me with a good feeling. I should have felt good about my self-restraint, or at least felt neutral about the whole thing. But I didn’t. I felt vulnerable, short of food, and that all the smug, well-stocked panic-buyers, were, as usual, nicely placed while the rest of us suffered. At that point, if someone had suggested a re-run of the French Revolution, I would happily have joined in.

I’m not sure, after several weeks of stocking up, we actually need any more food. The fridge is rammed, we have tins balanced on shelves and I’m struggling to use carrots quickly enough.

As I said to Julia, it’s like shopping for Christmas. Over the years I have managed to hold things back so I only buy twice the food we need for the two days, but the last few weeks have weakened my self-discipline and I have bought too much of some things. I have too many vegetables and too many tins of things like Spam, haggis and corned beef, but I don’t have enough bread or marmalade, and I ran out of English mustard last night. I forgot all about ordering more so unless I find some in the back of a cupboard I’ll have to eke out the last quarter jar of Dijon, which is OK, but doesn’t make your eyes water. Mustard isn’t as much fun without the danger.

The pictures below are basically just weeds in what passes as a front garden – a poppy that had already started to fall apart by 2pm, red valerian that is budding up, and a dandelion. When the best flowers in the garden are dandelions you realise quite how much you have let things slip. 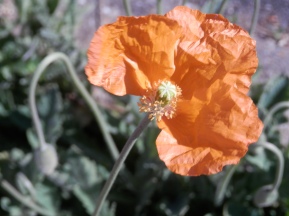 20 thoughts on “Notes for Posterity”