I was a bit rushed yesterday, so sorry about forgetting the title. It won’t happen again.

The big news is that as my swollen finger turned black I decided that it was time to join the number of people who treat the Accident and Emergency Department as a drop in centre. My reasoning was that they’d be empty on a Monday night, and as my doctor or the drop in centre would send me for an X-ray anyway I may as well cut out some of the waiting. Cynical? Yes. Good time management? Also yes.

So, there I was, with Neil Back talking about rugby on wide-screen TV. If this was a rugby blog I’d expand on this to tell you why I consider him a role model. But it isn’t, so I won’t. There were two people in with police escorts (one a rambling drunk and one a rambling drunk with a bare torso) and a group of lads who should probably have had one, plus the general mix of bewildered-looking people with limps, pained expressions and varied degrees of impatience.

I had a couple of books with me, and managed half of On Guerrilla Gardening by Richard Reynolds in the time I was there, making it time well spent. He has a very easy style and I may well write a review later, particularly as he mentions Gerrard Winstanley, one of my favourite historical figures.

Here’s a picture to be going on with. When this blog link appears on Twitter it always looks better with a picture. 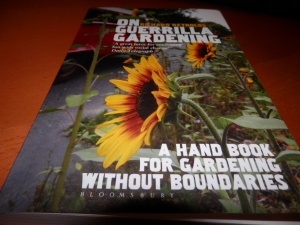 Anyway, to cut a long story short, after explanation, manipulation, phlebotomy and a couple of X-rays it turns out that the reason for the debilitating pain, the swelling, the blackening and the embarrassing cries I emit when shaking hands is a total lack of cartilage in the knuckle of one finger. I’m guessing that it’s not a very big bit of cartilage, so I’m feeling like a complete wimp. In my defence I must point out that it’s not just arthritis, but man arthritis, which is a lot worse.

When I finally got to the farm today it was raining and a man came to call.

9 thoughts on “The World Turned Upside Down”