PE10 covers the town of Bourne in Lincolnshire. It’s a lovely town with a lot of history. Hereward the Wake reputedly came from Bourne, the first of a long line of interesting people from Bourne, including clerics, explorers, criminals, a VC winner and Raymond Mays, founder of BRM. A BRM driven by Graham Hill won the Formula 1 Championship in 1962.

It’s tempting to add a link to Graham Hill, one of my childhood heroes, and his son Damon, who is one of only two sons to have followed his father as F1 World Champion. However, we’ve had Hereward the Wake,  Charles Sharpe and Raymonds Mays – that’s enough heroes for one post.

If I had my life over again I’d seriously think about living in Bourne. But I’d also work harder, save money and watch my diet so I’ll just have to let it pass.

WS8. I used to live in WS9, though I was so young I don’t actually remember it. This is in danger of becoming an autobiography. WS8 includes Brownhills, one of the least attractively named towns in the UK. It was apparently a big mining area in the seventeenth century and the name refers to the spoil heaps. In 1680 it was known as Brownhill – it seems to have become plural as more spoil heaps were formed.

I’ve been past Brownhills, but I don’t think I’ve actually stopped there. I used to have customers nearby, and the A5 runs past, as it has done for 2,000 years, having been built by the Romans as Watling Street. Next time I go that way I may drop in – they have a massive statue of a miner, which might be interesting.

Finally, BT71. It’s one of two postcodes for Dungannon, and includes Coalisland, another name derived from coal mining. It is claimed that you can see seven counties from the hill with the castle ruins, though it does say “depending on the weather”. It will almost certainly be raining, which is why Ireland is so green, so I wouldn’t bank on it. It’s like the old saying that if you can see the Isle of Man from the mainland it means rain is on the way. And if you can’t see it, it’s already raining.

The other story about Dungannon is that it has an untypical police barracks because of a planning mix up. Somewhere in Nepal, so the story goes, there is a typical Irish police barracks. Now all I need is a reader in Nepal to share a picture…

CT is Canterbury, but CT 17 covers part of Dover. It’s famous for its White Cliffs, which have never had bluebirds over them, despite what the song says. It’s also famous for its Roman Lighthouse , the tallest surviving Roman structure in Britain, and for the only Roman wall painting outside Italy.

I’ll keep it fairly general as I’m not really sure how much of Dover this code covers.

I used to stay in a Bed & Breakfast in Dover Docks when I reared chickens in the South East. The cheapest rooms were downstairs in the cellar, really just a sort of cell with no windows. It was cheap and as I sleep with my eyes closed the surroundings didn’t really matter. The breakfast was large and the proprietor was efficient and lacking in all false bonhomie. And all genuine bonhomie too, if I’m honest. I’m not much of a one for small talk when I’m stoking up at breakfast so that suited me too.

It’s a nice town, the 42nd largest built up area in England and Wales in 2011. It has also won awards for being friendly, clean and good to work in.

There’s much more, but again, I’m not sure how much is actually in IP1.

Finally – TN21. That’s back to Kent – Tonbridge. It includes Royal Tunbridge Wells. This is slightly confusing in normal speech – Tunbridge and Tonbridge.

TN21 includes the wonderfully named village Cross in Hand. This is actually in East Sussex. Such are the vagaries of the postcode system. It has a pub called The Cross in Hand.

The first record of the village is under the name of Cruce Manus in 1547. It’s supposedly Latin for Cross in Hand but doesn’t seem quite right – no “in” for a start. This comes from a legend that Crusader used to muster here before trekking off to the desert to die. They were not a particularly successful set of wars for us.

The Trip to Jerusalem in Nottingham was supposedly named for the same reason. I tend to grow cynical once the Crusaders are mentioned. Apart from Nottingham Crusaders – an old Nottingham Rugby League Club. 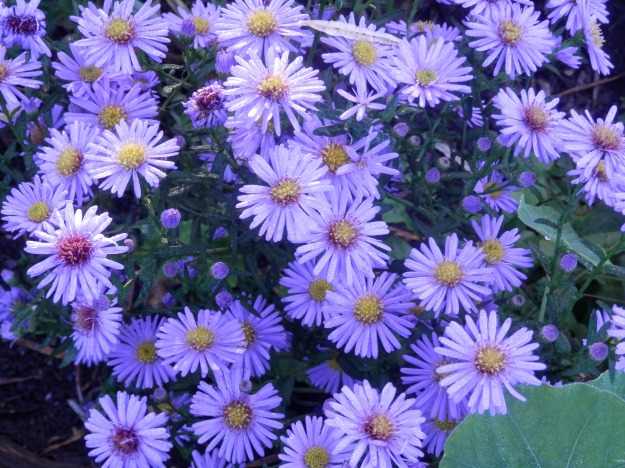 Todays pictures are dew soaked Michaelmas daisies from the gardens when I dropped Julia off. We’re a few weeks after Michaelmas, but they are still going strong.

Every day 27,000 trees are used to meet our need for toilet roll. That’s 9,855,000 a year. I’m not quite sure how many mature trees you get to the acre or how old a tree is when you harvest it, but the total amount of resources consumed must be huge.

About 75% of the world’s population does not use toilet paper.

According to figures from 2007, each person in the UK uses 17.6 kilos of toilet paper per year. The Americans only use 15.7 kilos. Consumption is forecast to rise by 40% by 2017 thanks to innovative marketing techniques. That’s a lot of trees.

I’m not surprised that it hasn’t become a major subject for discussion because the very thought of alternatives makes me shudder. I’ll quite happily discuss, and use, composting toilets (because it’s a massive waste of drinking water to use it in toilets) but I’m not so keen on doing without paper.

Faced with the choice of doing without toilet paper or a car  I’m not sure what I’d decide. It would be inconvenient to do without either but without a car the worst that can happen is that you have to walk. Or possibly share a bus with a drunk, a dozen school kids and a woman with facial piercings. Without toilet paper you undermine the whole basis of my life.

However, when I pause to think I have to admit that I’m in the first generation of my family who has always had access to proper toilet roll and it doesn’t seem to have done my forebears any harm. The Romans were reasonably successful and they only had sponges on sticks. Even the Vikings, though not great house guests, were fairly successful at looting and pillaging, and they, I’m reliably informed, used moss in place of toilet roll. (Yes, those trips to Hadrian’s Wall  and the Jorvik Centre definitely paid off).

Back in the 60s, there was a lot of Izal about. My grandparents had it, public buildings had it and even in the 70s I remember visiting a nurses’ home that had Izal printed with “Property of the National Health Service” in pale blue. If you do remember it, stop shuddering. If you don’t remember it, it made great tracing paper.

It’s a wide-ranging subject, with the Chinese leading the way, first with paper in the 10th Century then with specially made toilet paper in the 14th Century. One British maker, G.W.Atkins & Co, claimed to have royal warrants dating back to 1817. The Americans followed in the mid-19th Century.

In the 1930s one manufacturer was advertising that his paper was “now splinter free” . Makes you think, doesn’t it?

I think that’s enough now. There’s only so much thinking you can do about toilet roll.