Dropped Julia off at work this morning and took the opportunity to take a few photos. They have, as you can see, picked a variety of produce, including sloes. It’s probably a bit early to pick sloes, as the flavour is traditionally said to be better after the first frost. However, you can remedy this by putting them in the freezer. If you pour the gin or vodka on them when they are still frozen it’s supposed to burst the skins, which means you don’t need to prick them either.

I can’t vouch for the flavour part as I’ve never done any competitive testing. Nor can I guarantee that the skins split. What I can say is that we use this method and it produces a lovely smooth liqueur in time for Christmas. Using the freezer instead of waiting for nature to take its course gives you an extra couple of months to steep the fruit instead of waiting for the frost, and this is bound to help.

There are plenty of apples and pears waiting to be picked, plus, of course, the medlars.

The door is now repainted after the attempt at breaking and entering, and is looking good. 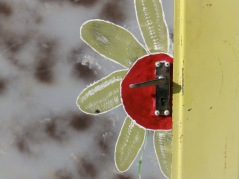 Finally, Julia has obtained five waste bins that were going to be thrown away. They are going to have a new life as planters. There were more available, but as Julia said, where are you going to get that much soil from?

They were bins but now they are planters.