No, not a blog about books. A friend of mine once provided me with an analogy of life being like a crowded bookshelf, where you put a new book on the shelf and one drops off the end.

In this case, I added the two post a day project and the Postcode Safari posts dropped off the end. They always seem to drop off. I think it’s because they take a lot of concentration compared to a post where you just start at one end, describe your day, or your concerns, and come to the end.

Even the scone chronicles suffer from this – I sometimes forget to take the photo, and there’s no point writing about a selection of crumbs. In that case I’m also a creature of habit, and you can’t keep writing about the same few places time after time. Nor can you keep making the same complaints. We go to several places that don’t serve particularly good food but they are convenient and the staff are friendly. Do you really want to read me droning on about it yet again?

Talking of which, we have joined the National Trust again and will doubtless be going to the worst cafe in the world again. This time we will be writing to the National Trust if things aren’t up to scratch,which will be something new to write about. Complaining is considerably easier, but seems to be less effective, since the rise of email contact forms.

That is why I have developed a new form of complaining. Instead of just ignoring things or complaining at the time, I leave it for a while and compose a stinging email telling people how much business they have lost as a result of me not dealing with them. It’s still like the old way in one respect – I never actually get round to sending it. 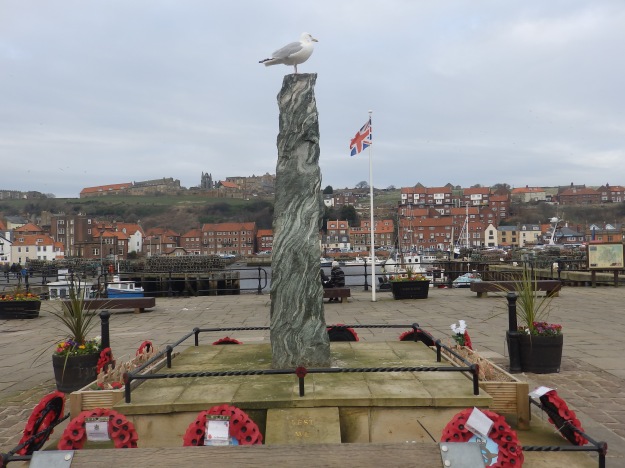 More photos from the “lost” Whitby photos – the new War Memorial (well, 2013). It’s like a lot of other towns in that it had a War Memorial Hospital, which was then lost to reorganisation. Casualties in recent wars highlighted the lack of a focal point for commemorations and resulted in this memorial being built – it’s local sandstone with a central column of a rather striking stone from Norway – Masi Quartizite. It’s appropriate, as the Green Howards (the local regiment) lost 156 men in the Norway Campaign – an often forgotten part of the Second World War.

15 thoughts on “The Crowded Bookshelf of Life”