It rained this afternoon, as you can tell from the top picture. That yellow blur in the middle of the picture is Julia’s jumper as she traverses the car park at TESCO.

However, as both Dolly Parton and G K Chesterton tell us: Without the rain, there would be no rainbow.

There was no rainbow today, which would have rounded off things nicely, but we did have a cream tea, so it was worth getting wet.

That was my part of the mission – whilst Julia shopped I waited until the rain slackened off, bought lottery tickets and selected two cream teas. Then I waited in the cafe… and waited…

It’s difficult to judge the best time to buy a cream tea when you’re waiting for someone who is shopping. It’s made more difficult when they have a habit of haphazard browsing. And, let’s face it, when you’re looking at a cream tea and salivating it can be a testing twenty minutes.

Eventually Julia’s random retail activities ended and we were able to start the cream tea. The scones weren’t too bad, the company was good (well, I thought it was, Julia may have another view) and despite a nagging feeling of guilt about the calorie intake, I enjoyed getting out.

I suppose it’s possible for a rainbow to be metaphorical. 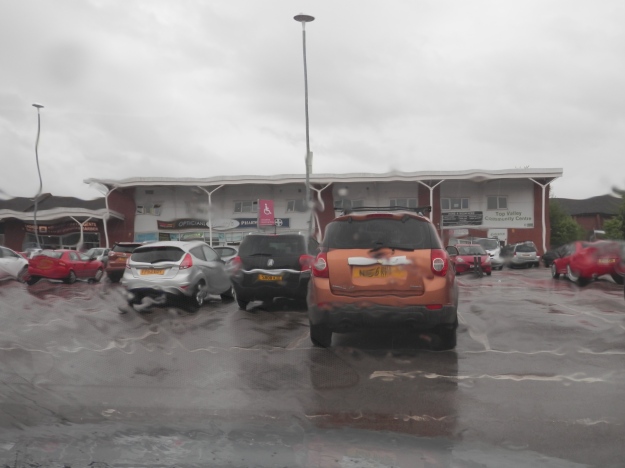 Eventually the rain eased up.

Whilst checking for rainbow quotes I found this quote from G K Chesterton.This one isn’t about rainbows, it’s about grandmothers, but it is quite interesting.

The word ‘good’ has many meanings. For example, if a man were to shoot his grandmother at a range of five hundred yards, I should call him a good shot, but not necessarily a good man.

21 thoughts on “Waiting for the Rainbow”