After six months of discussion (the “we should build a keyhole garden” phase) and three more of procrastination (one of my better developed skills) we eventually entered the final phase of pre-building – the “do a few hours and then stop” phase. We’ve had a circle of bricks and roughly chopped earth waiting for us for a bout a month now, but with trees and lambs and such we haven’t had time to get on with it.

At the weekend we decided we needed to start work again. There’s frost forecast for next weekend, and that’s just what we need to break up some of the lumpier bits. If that isn’t enough there’s a whole list of other reasosn to get on with it – planting time coming up, the need to focus and the upcoming “Kenya Day” we’re having.

You will search in vail for any Kenyan National Holiday on 9th May, we just seem to have chosen 9th May as a convenient day. I’m not sure what is being organised because I’m trying to avoid adding to my workload, but it’s pretty certainly going to involve a reduction in the goat population round here. What? You didn’t think we were rearing goats for fun did you? Farmers, as we always tell the kids coming round, don’t keep pets. 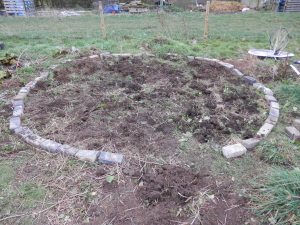 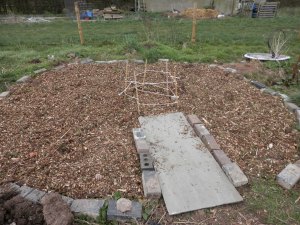 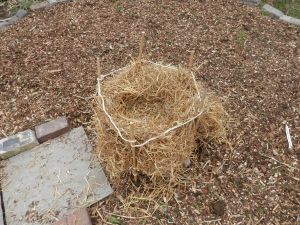 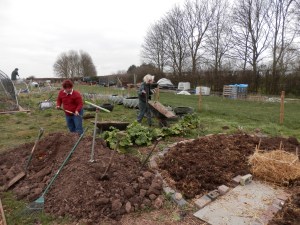 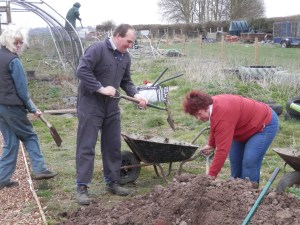 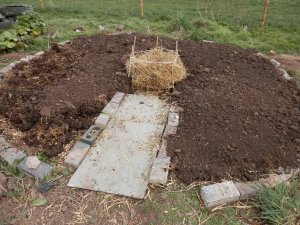 From the top left – The Start,. The next phase with drainage layer, keyhole and wood chippings applied and the compost cage in place. The compost cage lined with straw. My hard working staff starting to put soil on the layer of well-rotted pig manure. Close up of hard working staff, who by that time were starting to abuse the photographer and talk of tea. Final shot – most of the soil is in place – probably six to eight barrow loads for me and Julia to apply tomorrow and then we just have to let it settle for a while.

The theory is that you put compost in the central cage and water it, thus getting best value out of the water and the nutrients. Some beds are much more like raised beds but the bricks we had earmarked for the job ended up in a path so we’re having to make do with a lower wall. Despite this we will be getting an increase in surface area because of the slope. There are all sorts of keyhole beds, as you can see if you follow this link.